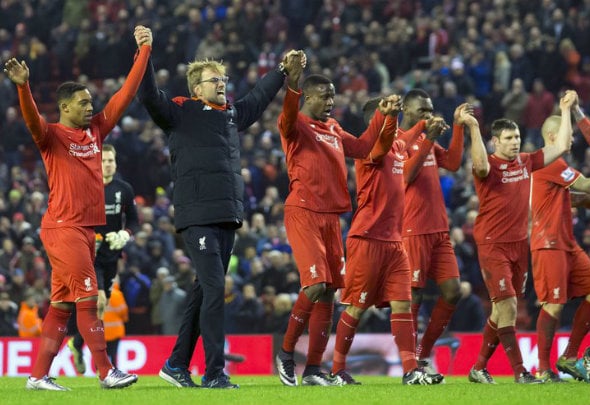 Jurgen Klopp revealed he wants an all-Merseyside League Cup final after Liverpool overcame Stoke in their semi-final on Tuesday night.

Klopp’s team beat Stoke in a penalty shoot-out after the score was locked at 1-1 over the two legs following extra time.

Joe Allen tucked away the 14th spot-kick to send Anfield wild and propel Liverpool into a record 12th League Cup final and the first of Klopp’s reign.

They will face the winners of Wednesday night’s semi-final between Everton and Manchester City at Wembley on 28 February.

“We have to wait for the opponent,” Klopp told Sky Sports afterwards. “Maybe the whole of Liverpool is on its legs and we play against Everton.

“Of course this would be a perfect match but if Man City is in the final, that would be cool, too. We can watch tomorrow and then we will see.

“It will be special. Wembley is a cool place to play football but when you go there it is only good if you win. It’s not much fun to lose.”