Rodrigo Moreno may be used predominantly as an impact substitute when he returns for Leeds United, according to Kevin Campbell.

Speaking exclusively to Football Insider, the former Arsenal striker, who is a weekly pundit on La Liga TV, is worried about the attacker, who turns 30 on Saturday, suffering frequent injuries.

Rodrigo has missed the last seven Premier League fixtures with a groin injury sustained in a 3-1 win at Leicester City in January. 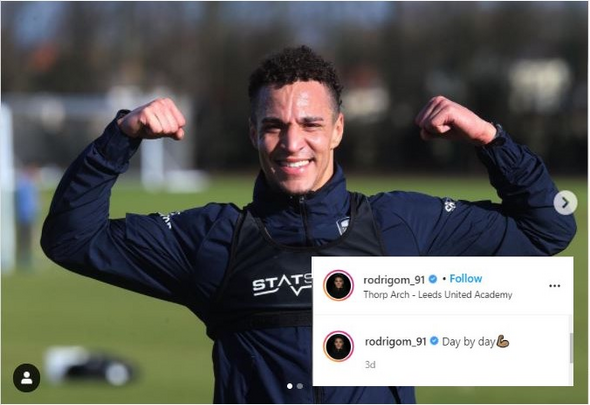 It is yet known whether the club-record £27million signing will be fit to face West Ham on Monday despite a picture on social media last month suggesting he was back in training.

His 18 Premier League appearances this season, of which 12 have been starts, have yielded three goals and one assist.

When asked for his thoughts on Rodrigo’s potentially imminent return, Campbell told Football Insider: “The injuries stack up as you get older.

“The game is so demanding, especially in the Premier League. It can be like that.

“He could be used as an impact substitute for now. I am sure he will want to get straight back into the XI, that is for sure, but sometimes it does not work out that way.

“Leeds have a lot of good young players coming through as well and I think Bielsa will look to give them minutes.”

A number of the club’s youth players have impressed for Mark Jackson’s Under-23s this season but perhaps none more so than Joe Gelhardt.

The 18-year-old has scored seven goals in 13 Premier League 2 appearances this term, and he has subsequently been named on the bench for the first team’s last four fixtures.

In other news, Whelan claims Alioski is in line to exit Leeds United as it emerges who will not be at club next season.