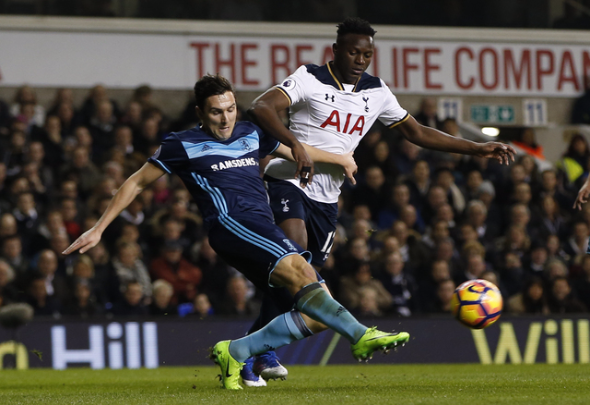 The 25-year-old Kenya international made the switch to north London from the south coast in the summer for a fee of £11million.

He played for the Hampshire-based side for three years, appearing 97 times for the club, which allowed Le Tissier to take a good look at the combative midfielder.

Now, ahead of Tottenham’s match against his former side, Le Tissier has told to the Evening Standard that he believes Chelsea’s N’Golo Kante is the only one in the Premier League better than Wanyama in his position.

“I’m not surprised at all [by Wanyama’s impact]. In that position in a football team there aren’t too many better than him,” started Le Tissier to the Evening Standard.

“You look at the way N’Golo Kante gets around the pitch and he’s probably the only one in the Premier League in that position who is ahead of Victor.

“He knows his job and he does it very competently. He’s not spectacular when he gets in the final third – it’s rare when goals come along.

“But in terms of what he does for the team it’s no surprise at all that he’s getting picked ahead of [Eric] Dier.”

Wanyama has transitioned into the Tottenham midfield with relative ease since his move, appearing in 37 matches for the north London club in all competitions this season.

He has been key to Spurs’ high placing in England’s top-flight as they sit in second place and he will be hoping to pass fit for Sunday’s match against Southampton after a neck injury suffered in last weekend’s 6-0 FA Cup demolition over Millwall.

In other Tottenham news, Stan Collymore has predicted Spurs’ match against the Saints.