Ledley King has revealed he is surprised by how comfortably Tottenham ace Eric Dier switches between defence and midfield.

The 23-year-old has become a crucial player to the Spurs set-up and has filled in at both centre-back and as a central midfielder in the past couple of seasons.

He has also played the two different roles at national level for England and is accomplished in both positions.

Mauricio Pochetitno used him as a defensive midfielder at the beginning of his Spurs career, but last season deployed him as a right sided centre-back in a three-man defence.

Ex-Spurs defender King has claimed he is shocked by how naturally Dier can fill two positions on the pitch and heaped huge credit on him.

“It can be difficult but playing multiple positions is the sign of a good player,” King said, as quoted by the Evening Standard. “You’ve seen Eric either step out or step back and make subtle adjustments.

“People rotate a lot more now and that’s one of the things that surprised me about how easy it was for Eric. With the ball at his feet he looks very comfortable and very cultured.”

Dier made the seamless transition to defence last season, forming a solid partnership alongside Toby Alderweireld and Jan Vertonghen.

The north London club benefited from a 3-4-3 formation and it appears that the versatile ace is set to continue in the defence for now.

He may face tough competition to get back in the midfield, with the likes of Victor Wanyama, Mousa Dembele and Harry Winks all vying for a position.

In other Tottenham news, Ryan Giggs has assembled where they need to strengthen. 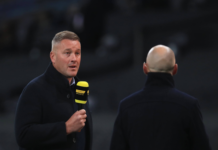