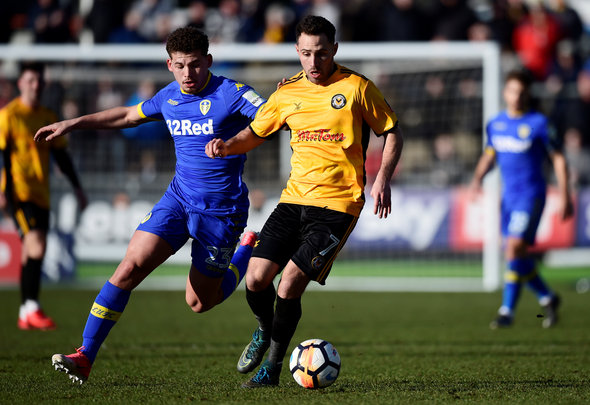 Leeds United fans have taken to Twitter to rave about Kalvin Phillips for his performance in the 2-1 defeat against Newport County at Rodney Parade on Sunday.
The Whites let slip of a first-half lead from Gateano Berardi’s long-range strike to concede two in the space of several minutes later and while it was not a memorable performance overall by the Whites, many fans were impressed by Phillips.
The 22-year-old midfielder was one of just two players to have kept their spots in the first-team as him and Berardi were named in a rotated squad as Thomas Christiansen gave a host of fringe players the chance to impress.
However it was the first-team regulars of Berardi and Phillips who stood out the most according to the supporters, with one fan saying that Phillips is like a “machine”.
Here is a selection of their tweets:

Good first half from #lufc. Berardi the standout and great goal from him. Phillips and Cibicki also doing well. Newport look dangerous though particularly from crosses so need to compete harder. Lassogga and Grot pretty anonymous #MOT

Agree with full backs, but think klich and Phillips been good together, pitch ain’t helping them at all

https://twitter.com/T_G_2015/status/949984312367206400
Phillips has been ever-present for Leeds in their midfield this season.
He has made 27 appearances across all competitions, scoring five goals and supplying two assists in the process.
It remains to be seen whether or not Christiansen will now drop him from the team against Ipswich on Saturday in order to give him a bit of a rest after playing every game in the festive period.
In other Leeds United news, this Elland Road striker could be sidelined until March after suffering a major injury blow.
We’ve launched a << BREAKING NEWS FEED>> exclusively for your club. ‘Like Us’ on Facebook by clicking here if you want 24/7 updates on all Leeds United breaking news.