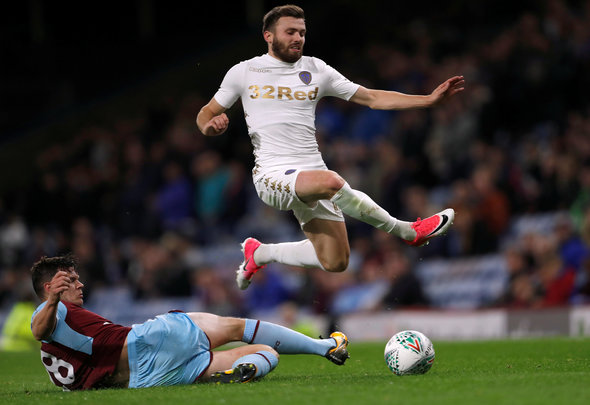 By Richard Parks
Leeds United fans have delivered mixed reactions on Twitter after Stuart Dallas joined Liam Cooper in hitting back on the social media site at the club’s dressing room picture controversy.
Thomas Christiansen’s men were demolished 4-1 by Cardiff City at Elland Road on Saturday in a match in which Pontus Jansson left the pitch on a stretcher and Gaetano Berardi was sent off before half-time for two yellow cards.
The defeat was Leeds’ worst of the season and, following the match, a picture emerged on Twitter from a supporter showing the Leeds squad in the Elland Road dressing room, with the majority of players looking down at their mobile phones.
But Leeds skipper Liam Cooper, who missed the defeat through suspension, and Stuart Dallas, who was brought on for Jansson, were quick to hit out at the claims on Twitter.
“Understand the frustration but photo taken from someone on a tour at 11.15am,” posted Cooper.
“We check our phones before we go into pre-match at 11:30. All phones are banned from 13:30. Don’t believe other individuals perception Karl, We win the game this picture is never seen. You know that.”
Dallas also confirmed that the photo was taken out of context.

It’s 4 hours before kickoff. Once we’ve had our meeting there’s no phones allowed.

Leeds fans reacted en masse to Dallas’ claim, with some offering sarcastic responses and refusing to believe the players would be in the dressing room four hours before the match even starts.
Others claimed it was a storm in a teacup and praised the Northern Ireland international for having the good grace to deliver the Leeds’ squad’s version of events.
Here is a selection of the best messages on Twitter:

“Are we allowed our phones out boss”?
“I don’t know, ask Victor”…

In the dressing room at 11am? Of course!

Fair enough Stuart. The fans are rather sensitive tonight after an horrific run of form yet again. We don’t stand a chance of top 6 if we don’t get some consistency. Keep fighting! #MOT

That’s ok “ish” – what annoys me more about this photo is that it was taking by a fan on a stadium tour and not one of the squad are even acknowledging them? What’s the reason for that Stuart?

Fair enough for having the balls to come out & say something Stuart.

Try communicating with each other off the pitch more and it might help when you play together on the pitch. #together

The defeat leaves Leeds in 10th place in the Championship but now seven points off a play-off spot ahead of the trip to Sheffield United next weekend.
In other Leeds United transfer news, it can be revealed that a centre-forward who has player for the team this season has had his contract terminated.