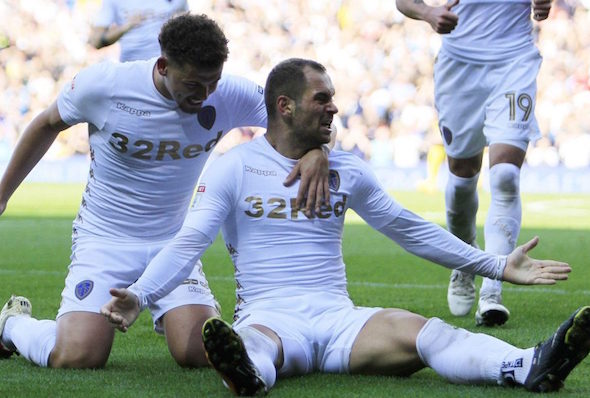 By Richard Parks
Pierre-Michel Lasogga has claimed in an interview with SportBild that he feels at home at Leeds United as he hinted at a permanent move to the club – and fans have delivered mixed verdicts on the German being signed to a full-time deal.
Lasogga, 26, joined Leeds last summer on a season-long loan from Bundesliga club Hamburg, who are reportedly paying two-thirds of his £50,000-a-week salary while he is in England.
The striker has had a mixed campaign, scoring seven goals and supplying four assists from 20 appearances in all competitions, with all of his 11 goal contributions coming in the Championship.
Asked about his future beyond this season and whether he will return to Hamburg to see out the final year of his contract, Lasogga told SportBild: “I don’t worry about that yet. Not until the end of May, when the season is over. Everything else would be wasted energy. Finally, I have one more year contract in Hamburg. And I wish that HSV remains in the Bundesliga.
“In Hamburg, I was on ice. I didn’t get a chance and probably spent most of my time watching. If you only play for five minutes, then spend several months without a goal, it nags your self-confidence. It was important for me to just have fun again, to be successful and to have an environment that is 100 percent dedicated to me. That’s the case here.”

Leeds fans are split on whether Lasogga should be signed permanently, with some claiming he is a “massive player” and too good for the league, and others still to be convinced.
Here is a selection of their messages on Twitter:

Lasogga massively talking us up in the German media. Saying he feels at home in Leeds.
Also feels incredibly disrespected by HSV investor Kühne’s “flop of the century” comment. Can’t really blame him.

Still not convinced by him. See what he’s like under PH until end of the season.

if he is willing to drop his wages to the wage structure we are paying why not? he has showed signs he can be a good player at this level just needs to be more consistent and more match fit.

Massive pay cut needed but there is class there! He was hot property in Germany a few years ago and was called up for the national team, sort his fitness out and he would boss this league

On paper lasogga should have been the deal of the season, German international and goal scorer in bundesliga, if fitter and played to his strengths should tear this league apart

Probably just getting his name out there. Wondering if our new fitness people can actually get him and the others fit to play football now

The question is will AR pay the fee for him? I’d be happy with him staying full time but he needs to work on his fitness big time during pre season

He is massive player way above this league, just needs to play this season without injury and good pre season. He was considered great prospect but injuries stalled his career in Germany

Lasogga scored twice on his Leeds debut as the fans immediately took to his powerful style of play and finishing ability.
But he had scored five of his seven goals by late October and only two subsequently, both of which came in a 4-3 defeat to Millwall last month.
Supporters were baffled by his lengthy absence due to illness and injury in November and December, and he has struggled to complete matches over the winter.
Nevertheless, he was the first-choice spearhead when available for selection during mostof Thomas Christiansen’s reign, which ended on Sunday night, and must now convince new boss Paul Heckingbottom.
Lasogga’s main competition to lead the front line is the versatile Kemar Roofe and deadline day signing Tyler Roberts, as Caleb Ekuban is out injured with his second serious foot injury of the campaign.
In other Leeds news, the club have been hit by yet another shattering senior player injury blow.
Don’t miss out on breaking and exclusive Leeds news by clicking here for our brilliant 24/7 updates on Facebook, Instagram and YouTube.