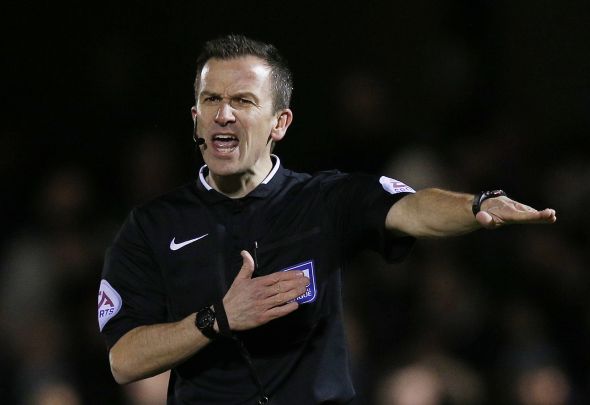 Leeds fans have reacted angrily on Twitter to referee Keith Stroud’s performance against Bristol City as their winning streak came to an abrupt halt.

The 47-year-old was at the centre of controversy throughout the match that eventually saw him send off Leeds boss Garry Monk during his side’s 1-0 loss on Tuesday night.

Monk was sent off after reacting angrily to a yellow card picked up by in-demand left-back Charlie Taylor during the latter stages of the games, as emotions blew over.

Marlon Pack’s 59th-minute winner for Lee Johnson’s side has ended Leeds four-match winning run that had seen triumphs over the likes of Blackburn, Cardiff and Ipswich.

Leeds fans are not happy with Stroud’s performance, with many believing the Bournemouth-born official missed a foul on Spaniard Pablo Hernandez in the build up to Pack’s goal.

Just seen the Bristol City goal… definitely a foul. Ref was giving those throughout the whole game. Feel even more annoyed now!!! #lufc

This ref is awful tonight ! #lufc

Little man syndrome taken over this game. Tomlin and the Ref. #LUFC

Ref was shocking too. Definitely a foul on Pablo before they scored. #lufc

Referee was absolutely shocking. The Football League is corrupt #lufc

Poor referee. As usual. Stood off them for their goal. As usual. Deserved more than we got though. As usual. #lufc

One fan has even considered the possibility that the former Swansea boss could be looked at as England’s next manager after Sam Allardyce left the role.

Tuesday night’s loss means that Leeds must pick themselves up on Saturday as they aim to generate some momentum before the international break.