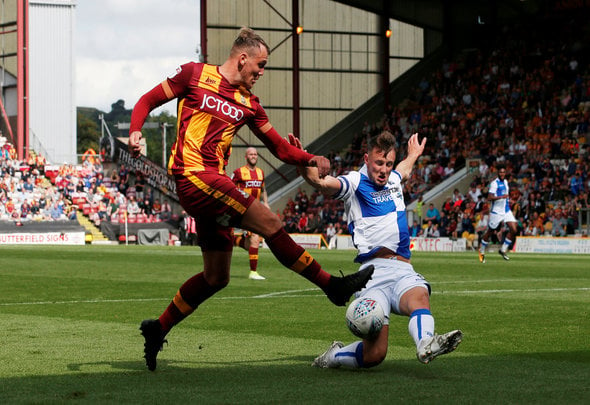 Leeds United are joint-favourites to sign centre-forward Charlie Wyke from their Yorkshire rivals Bradford, according to the latest bookmakers’ odds.
BetVictor have Leeds, Middlesbrough and Sunderland priced at 6/1 to seal a last-gasp swoop for Wyke, 25, ahead of the 11pm transfer deadline on Wednesday night.
Norwich (8/1) and Hull (10/1) are also in the running to sign up the former Carlisle striker, who has scored 13 goals in 30 appearances across all competitions for Bradford so far this season.

The Mirror reported in their live transfer blog last Wednesday [11:15am] that a clutch of Championship teams are interested in the Valley Parade powerhouse forward.
It was understood that Middlesbrough were eyeing up the target man and Bradford manager Stuart McCall had slapped a £5million price-tag on his head to ensure he does not leave the League One club before deadline day.
Leeds were previously second-favourites to sign Wyke, with Boro in pole position, but an update in the market has seen the Whites emerge as joint-favourites.
However it does not seem as though United will be able to pull off a late swoop for the centre-forward, with a complete lack of activity at Elland Road at the moment and a game against Hull on Tuesday night may slow down any progress towards any signings.
In other Leeds United news, an £8million bid has been accepted for this forward wanted by the Whites.
We’ve launched a << BREAKING NEWS FEED>> exclusively for your club. ‘Like Us’ on Facebook by clicking here if you want 24/7 updates on all Leeds United breaking news.