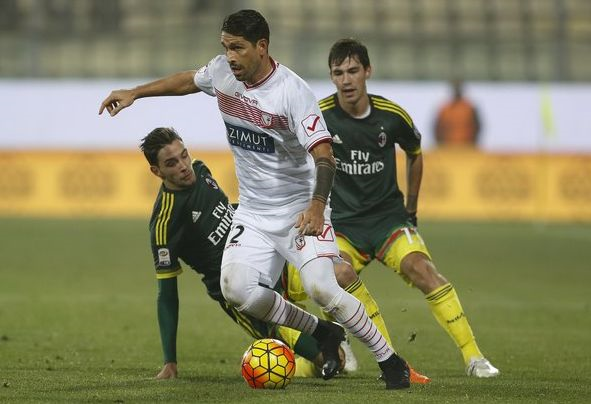 Leeds owner Massimo Cellino has made an approach for Italy international striker Marco Borriello, according to a report.

However, they also revealed that Cagliari have no intention of selling the veteran striker, who is deemed ‘untouchable’ by senior duo Tommaso Giulini and Massimo Rastelli, and rejected Cellino’s approach.

The 34-year-old, who has been capped seven times by Italy, has been in superb form in front of goal this season, netting 11 goals from 18 appearances in all competitions.

Leeds are in the market for some new players, after the first-half of the campaign saw Garry Monk’s side emerge as genuine promotion candidates.

Monk has seen his side lose just twice in the league since mid-October, a remarkable run that has seen them into fifth in the Championship.

Chris Wood is the current top goalscorer at Elland Road this season with 16 goals, but Leeds do not have much cover for the New Zealand international.

Cellino intended to bolster their attacking options with Borriello, but Cagliari’s stance on any potential deal is clear.

The former AC Milan and Juventus striker has spent the majority of his career in Italy, signing for a club outside his home nation just once to date – an ill-fated spell on loan at West Ham in 2014.

Aside from his Hammers nightmare, Borriello has achieved reasonable success during his career, lifting two Serie A titles, as well as the 2006-07 Champions League with Milan.

He would have brought vast experience to Leeds’ ranks ahead of their promotion – and perhaps even title – push; not to mention his goals.

Whether Garry Monk had agreed to making an approach for Marco Borriello remains to be seen, but Massimo Cellino was certain the 34-year-old could have been key to Leeds’ promotion challenge during the second-half of the campaign. The Italy veteran does have a lot of experience, and he is a proven goalscorer, which would have been valuable to Leeds in line with their ambitions. However, he didn’t have the best of times during his previous spell in England, and his advancing years means any such deal could only be short-term. While Chris Wood is available, Monk is unlikely to put his trust in another striker, so Borriello may not have had a regular role at Elland Road. Cagliari consider him a valuable player, so staying at the Italian club is probably the best thing for him.

In other Leeds news, the club are on the verge of completing their first January transfer.