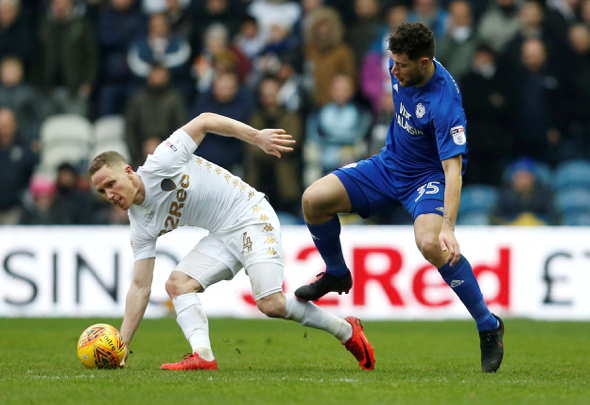 Leeds United midfielder Adam Forshaw believes that the Whites still have a chance of making it into the play off spots despite defeat against Sheffield United at the weekend.
It was new manager Paul Heckingbottom’s first game in charge since becoming manager at Elland Road following the sacking of Thomas Christiansen the weekend before last.
However, there was no change in fortunes in the 2-1 loss.
But despite the defeat, Forshaw remains positive and as quoted in the Yorkshire Post he said: “There’s 15 games left and there’s still plenty of points to play for.
“We’ve got some really talented players, good young players mixed with good experience as well, so the ability is there, definitely.”
The 26-year-old only arrived from Middlesbrough during the January transfer window and has yet to taste victory in a white shirt.
Leeds have been in a disastrous run of form lately.
Four defeats out of the last six games played in the Championship and no wins has seen the side fall from the play off positions to 11th in the league table.
And it doesn’t look as though things will get any easier on Saturday with a visit of Bristol City to Elland Road.
There was a source of good news on Monday when it was revealed by an insider of the club that 18-year-old Dand Burlace had been offered a new two-year contract to extend the highly-rated youngster’s stay with the Yorkshire outfit.
In other Leeds United news, the Whites offer two-year deal to player – insider.