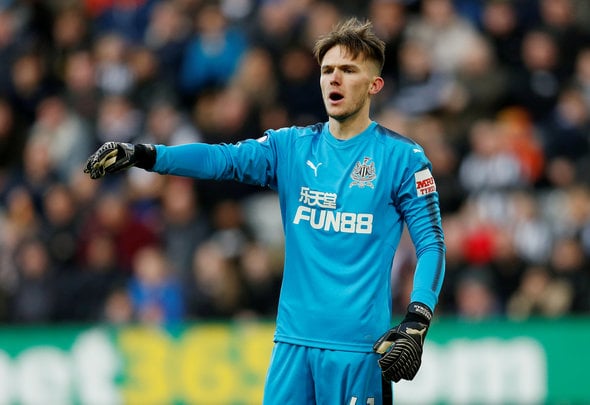 It is set to be all change at Leeds United over the summer transfer window with Paul Heckingbottom said to be seeking an overhaul at Elland Road – leaving the futures of many under threat.

The Whites have endured a bitterly disappointing campaign this season and will be counting down the days until it is over, where the former Barnsley boss will no doubt be looking to build an improved squad in the hunt for promotion.

It has been claimed by the Sun on Sunday that Heckingbottom will be seeking to splash the cash on a new goalkeeper in the summer transfer market, despite the arrival of Felix Wiedwald and Andy Lonergan last summer, leaving the duo’s futures at Elland Road in serious doubt.

However, he can save himself the price of a new shot stopper by seeking out a loan deal instead, and there looks set to be a very tempting option made available at Newcastle United in the form of 21-year-old Freddie Woodman.

The England youth star was named the top goalkeeper during the Three Lions’ successful under-20 World Cup campaign last summer, and after making his debut for the Magpies in the FA Cup, was sent out to Scottish top flight side Aberdeen in January to gain some much needed experience.

Having starred for the Dons so far, with two clean sheets in six appearances across all competitions, he is unlikely to be in line for a regular first team role at St James’ Park next season, and so another loan exit is on the cards, which is where Heckingbottom must pounce.

It is a move which works for all parties, with Woodman being handed the game time he desires, Newcastle having one of their hot prospects developed at an ambitious side and Leeds securing the services of one of England’s most highly rated shot stoppers.

After the failure of Wiedwald, the club need someone who knows English football and what it takes to succeed when the pressure is on; with a youth World Cup final under his belt, there is little more pressure the youngster could have experienced, and is the ideal signing for the Whites.

In other Leeds United news, the club have suffered a senior bombshell with two stars out of action.