COMMENT By Richard Parks
Now is the perfect time for Leeds United to reignite their interest in signing Peterborough goal machine Jack Marriott.
The Mirror claimed in January that the Yorkshire giants were in pole position to land the striker, who has ripped up League One this season with 25 goals from 46 matches in all competitions.
In the event, Leeds turned their attention to Tyler Roberts and a deal worth up to £4million was sealed on deadline day.
With Roberts aged 19, injured and unlikely to play again this season, and with main man Pierre-Michel Lasogga only on a season-long loan, a proven centre-forward has to be a priority for director of football Victor Orta in the next transfer window.
That man should be Marriott, who has become the latest Peterborough striker to run amok in the third tier following the likes of Aaron McLean, Dwight Gayle, Craig Mackail-Smith, Britt Assombalonga and Conor Washington.
The former Ipswich Town player, who ignited his career when he stepped down the divisions to join Luton on a free in 2015, only joined Peterborough last summer.
But the sacking of Grant McCann last Saturday and the appointment of ex-Leeds manager Steve Evans as his successor today (Wednesday is sure to lead to Marriott questioning his own future.
Peterborough have dropped out of the play-off places and the man who has been pivotal to the finest season of his career has been given the boot.
Leeds must seize the opportunity to swoop for Marriott.
In Twitter exchanges with Leeds fans in January, Yorkshire Evening Post correspondent Phil Hay said on his personal account that it would cost £6million to land Marriott.

Marriott will cost about £6m. I can’t see it.

At the time, that was seen as too expensive for Leeds, but they subsequently forked out a combined £9.5million for Adam Forshaw, Laurens De Bock and Roberts.
It is a measure of Marriott’s remarkable progress than the only Englishman to score more goals than him across all four divisions this season is Harry Kan. Marriott has struck 25 goals, 19 of which have come in 32 league matches, since joining from Luton Town last summer and has made the climb from the fourth tier to League One look an easy one.
Leeds’ interest is understandable, given that they could crying out for a prolific goalscorer, especially if they can’t negotiate the signing of Lasogga.
This would be a deal that could solve the club’s goal problems instantly.
In other Leeds United news, the club have agreed the terms of an £8.5million deal, with the first payment scheduled for the summer. 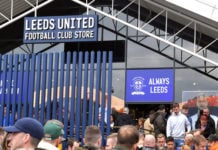