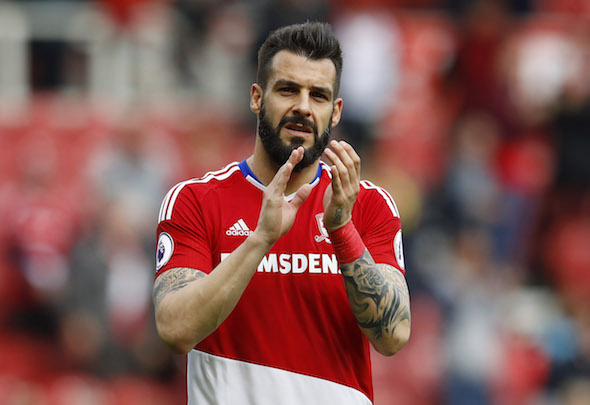 There were conflicting claims on Sunday about Leeds United’s reported bid to sign striker Alvaro Negredo from Valencia.

The FL92 Transfer account claimed earlier in the day that the Championship giants are on the verge of settling a price with the La Liga club for the former Manchester City and Middlesbrough attacker.

But Yorkshire Evening Post correspondent Lee Sobot immediately poured cold water on the possibility of Negredo moving to Elland Road even though the Mirror had also reported on Friday night the Championship giants are firmly in the running to sign the 31-year-old.

Sobot claimed in a Twitter exchange with a Leeds fan that Negredo’s wages are way out of reach for the club amid speculation he earns £100,000-a-week at Valencia.

The regional journalist said he “would be amazed” if United were able to pull off a deal for such a highly paid player regardless of them being able to fix a price with the Spanish outfit. Negredo, who has two more years to run on his Valencia contract, has an impressive track record both in Spanish and English football.

In 21 Spain internationals, he has also struck 10 times.

Negredro’s wages and transfer fee are the kind of sums that have automatically ruled Leeds out of the running in the past. It would take a huge change of approach for the club to pull off a deal for a goalscorer of considerable repute, who has done the business both in the Premier League and La Liga. The Spaniard may turn 32 next month and his best days are likely to be behind him, but he remains a goal plunderer supreme and he would be dynamite in the Championship. If Orta, Christiansen and Andrea Radrizzani pulled this deal off, they would instantly make Leeds one of the promotion favourites.