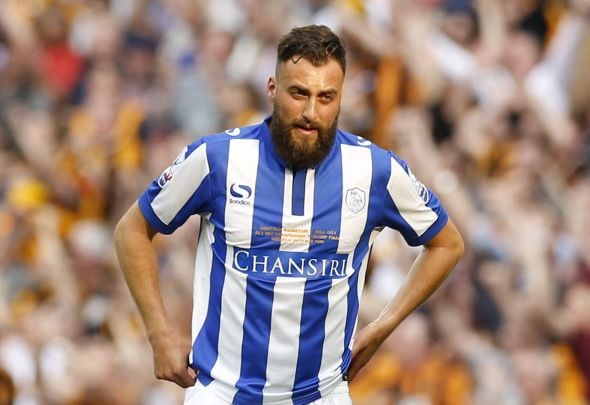 Leeds could be set to raid bitter rivals Sheffield Wednesday for target man Atdhe Nuhiu, according to a reliable journalist.

The 27-year-old forward has struggled to break into Carlos Carvalhal’s first team this season, with Fernando Forestieri and Gary Hooper preferred as Wednesday’s starting strikers.

Radio Yorkshire presenter Joe Rawson revealed on his personal Twitter account that talk of a potential move for Nuhiu had come from a “very good source”, as Leeds look to take the goalscoring pressure off of Chris Wood’s shoulders.

Leeds have been rumoured to be interested in bringing a striker to Elland Road this summer, as Swedish forward Marcus Antonsson fails to provide sufficient back up for Wood.

Not renowned for his goalscoring prowess, Nuhiu has entered his fourth season at Hillsbrough after moving to Yorkshire on a free transfer from Turkish side Eskisehirspor.

The 6ft 4in colossus has scored just 24 goals in 160 games for the Owls, and could be allowed to leave in January as Wednesday look to avoid losing their striker on a free in less than 18 month’s time, when his deal expires.

Nuhiu would certainly provide manager Garry Monk with a different option up front, as his aerial prowess in the opposition box is widely regarded as among the best in the Championship. However, Leeds should seriously consider his lack of goals at this level, before making a move for the former Rapid Vienna striker. There are other Championship options out there, while a loan move for a number of Premier League strikers could prove more attractive to former Swansea boss Monk when compared to Wednesday’s number 44. It also remains to be seen if Wednesday will want to do business with their Yorkshire rivals, with both sides currently vying for a play-off spot.

In other Leeds transfer news, here are three reasons why Arsenal star Chuba Akpom would be a good signing for Leeds.