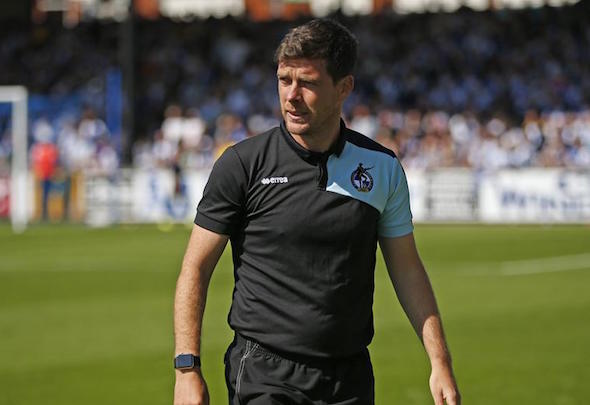 Leeds are locked in talks with Bristol Rovers about a compensation package for No1 managerial target Darrell Clarke, according to a report.

Rovers revealed on Tuesday morning they have turned down an approach from Leeds for Clarke and that they have offered their 38-year-old manager a new three-year deal.

But the Yorkshire Evening Post claim Leeds are continuing to push for talks with Clarke after identifying him as their No1 target to replace Steve Evans.

It is said the the Elland Road club are expected to bring Clarke to the table by meeting the demands of the newly-promoted League One side.

Compensation for the Rovers manager is expected to be in the region of £250,000 and the two clubs have been haggling over the structure of staggered payments which United will commit to if Clarke agrees to replace Evans as manager.

Rovers have attempted to fend Leeds off by offering Clarke, the boss who has led them to promotion from the National League and League Two in the past two seasons, an improved three-year deal at the Memorial Stadium.

It is reported that Clarke is firmly at the front of the queue for a job which is still officially held by Evans.

Controversial Leeds owner Cellino is abroad in Italy and said on Tuesday that he had been in touch with at least one alternative candidate.

“I’ve not decided about the manager,” said the Leeds owner and chairman, as quoted by the Mirror. “I’m in Italy now meeting another before I decide.”

Nevertheless, Clarke has been installed as the heavy odds-on favourite to be the new Leeds manager.

The betting odds changed earlier in the week after it emerged that MK Dons boss Karl Robinson had rejected the chance to become the new Leeds manager after holding talks with owner Cellino.

Meanwhile,  Evans is in line to become the sixth manager to be dismissed since Cellino took over the Yorkshire club in 2014.

The Scot has been left hanging by a thread since Leeds’ season ended over two weeks ago and the owner’s comments make it clear he will be sacked.