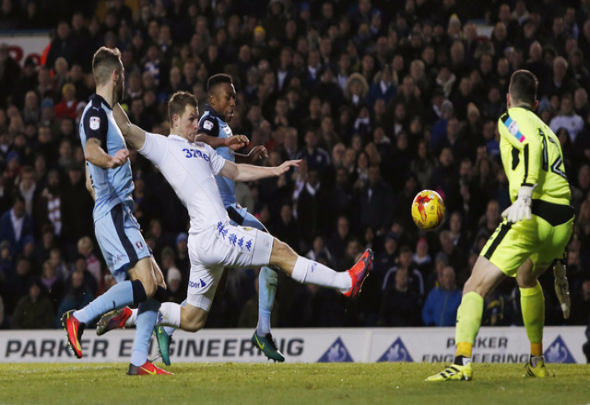 Leeds have laughed off interest in Chris Wood following a number of approaches, according to a reliable journalist.

The Mail’s northern correspondent Jack Gaughan took to Twitter on Thursday night to reveal that a “couple of clubs” have made tentative enquiries for the in-form striker.

Gaughan reported that Leeds rebuffed the interest and added they have placed a £15million valuation on the New Zealand international.

Couple of clubs asked tentative question re Chris Wood. Leeds laughed them off, value him at £15m given Hogan numbers.

The Mail reporter explained that Leeds’ price tag has partly been determined by the “numbers” of the fee West Ham are expected to pay their Championship rivals Brentford for striker Scott Hogan, with talks centred on a deal worth around £13-15million.

Like Hogan, Wood is in his mid-20s – the Leeds man has just turned 25 – and has scored 14 Championship goals this season.

However, the Elland Road spearhead has an even better strike rate, scoring a league goal every 138 minutes this season compared to 161 minutes for Hogan.

Wood has overcome a sticky start to the season to score 17 goals in 29 games in all competitions in 2016-17, to firmly establish himself as Leeds’ main striker and one of the key players in their promotion bid.

It is enough to place the striker, 25, near the top of the Championship scoring charts, with his tally bettered only by Dwight Gayle (20), Glenn Murray (15) and Tammy Abraham (15).

Leeds manager Garry Monk has made it clear that he is in the market for attacking reinforcement this month, and is “definitely” trying to bring in a striker as cover for Wood.

At first glance, £15m might appear a fanciful valuation of a player who was so heavily criticised by his own fans in the early weeks of the season. But Wood has been revived by Monk and his coaching staff, and is developing into a striker every Championship club would love to have in their ranks. The jury is out on whether the strapping spearhead has the technical ability, mobility and movement to prove as much of a thorn to top-flight defences, but he is young – Wood only turned 25 in December – and has his best years ahead of him. He also is a demon in the penalty box, excellent in the air and an emphatic gobbler of chances on the deck or in the air.