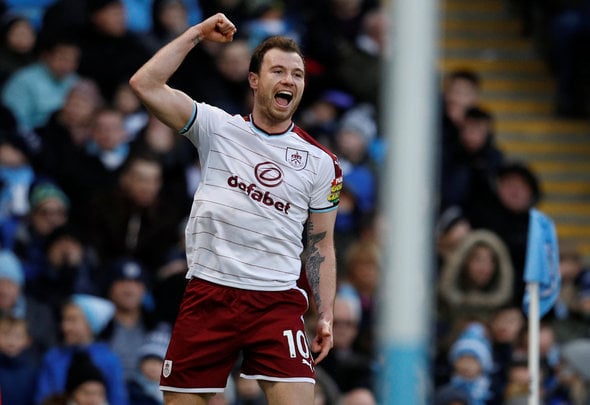 Leeds United have been installed as one of the frontrunners to sign Burnley forward Ashley Barnes ahead of Wednesday night’s transfer deadline, according to the latest bookmakers’ odds.
BetVictor have priced Leeds, Chelsea and Norwich all as joint 8/1 second-favourites to sign Barnes, 28, before the end of the January window, but Crystal Palace appear to be clear favourites having been installed at 3/1.
The Daily Mail has reported that the London club is plotting an £11million bid for Barnes, who has 18-months left on his contract at Turf Moor.

Newcastle and Fulham (10/1) have been listed among the outsiders to sign Premier League forward Barnes after he was bizarrely reported to be a transfer target of English champions Chelsea this month – despite scoring just four goals for Burnley.
The former Austria youth international has made 26 appearances in all competitions for the Lancashire club but has only started eight times in the Premier League.
Burnley have been in great form this season, so Sean Dyche may want to keep his squad together for the second half of the season as they eye up a shock qualification to the Europa League.
Leeds may be tipped to sign Barnes but Football Insider has exclusively revealed that Thomas Christiansen will not be welcoming anymore forwards to Elland Road this month, despite the outcry from the fans.
In other Leeds United news, the Whites are in the hunt to sign this dazzling right-sided flyer from a top six club.
We’ve launched a << BREAKING NEWS FEED>> exclusively for your club. ‘Like Us’ on Facebook by clicking here if you want 24/7 updates on all Leeds United breaking news.