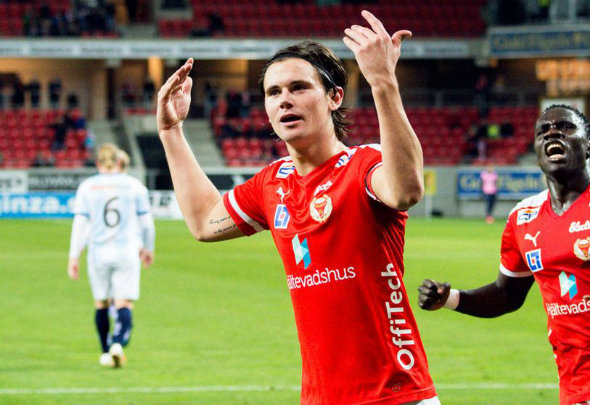 Kalmar sporting director Thomas Andersson-Borstam claims the club are in advanced talks with several clubs over the sale of Leeds target Marcus Antonsson.

Leeds have been credited with a strong interest in the striker, who has managed 25 goals in just 47 appearances for the Swedish club and has hit ten goals in 12 Allsvenskan league games so far this season.

Antonsson is believed to have been earmarked by Leeds as a potential bargain buy at a rumoured £1.2million and Andersson-Borstam revealed the club are negotiating the striker’s departure.

“There is continued interest,” said Andersson-Borstam speaking to Swedish website 24Kalmar.se. “Yes, we have received an offer for him – from more [than one club].

“We are in talks with a number of clubs, there is intensive work now.”

Antonsson joined Kalmar last year and is under contract with the club until December 2018.

It is also believed the in-form striker would prefer a move outside of Scandinavia and is not interested in joining either current Allsvenskan leaders Malmo or Danish giants FC Copenhagen if offers from England were on the table.

In other Leeds news, Whites owner Massimo Cellino has responded to reports he is on the verge of another appointment.