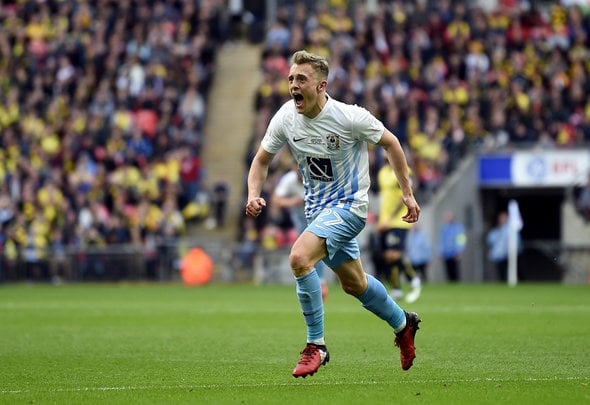 Leeds are eyeing a move for Coventry youngster George Thomas, according to a report.

Football Website HITC claim that the Whites are keeping tabs on the 20-year-old attacker after his impressive performances this season.

It is understood that Leeds are joined by Burnley and QPR in showing their interest in the emerging star, who has developed through Coventry’s academy.

The report details that the trio are weighing up a summer move, when Thomas’ existing deal is set to expire.

Coventry may find it difficult to keep hold of one of their prized assets as they are on the brink of relegation to League Two.

However, the Sky Blues did have reason the celebrate as they won their first piece of silverware in 30 years.

They beat Oxford 2-1 at Wembley in the EFL Trophy final and Thomas scored a decisive goal in the victory.

The 20-year-old is often used as a secondary striker, but can also play in the wide attacking positions.

He has impressed since making his breakthrough into the first team and has made 30 appearances this season across all competitions, scoring seven goals and supplying two assists.

Leeds have shown a real desire to introduce youngsters into the set-up this season and Garry Monk has proved that with the emergence of 18-year-old midfielder Ronaldo Vieira. The Whites are vying for promotion from the Championship and will hope to be playing football in the Premier League next season. Coventry youngster Thomas is certainly an exciting prospect, but can’t be expected to make an instant step up to the top flight of English football. The attacker has chipped in with seven goals for his struggling side and played a vital role during their success in the EFL Trophy. Leeds should consider a move in the summer when his contract expires and allowing him to continue his development out on loan.

In other Leeds transfer news, the club should plan a raid for a PL defender whose contract expires in the summer.