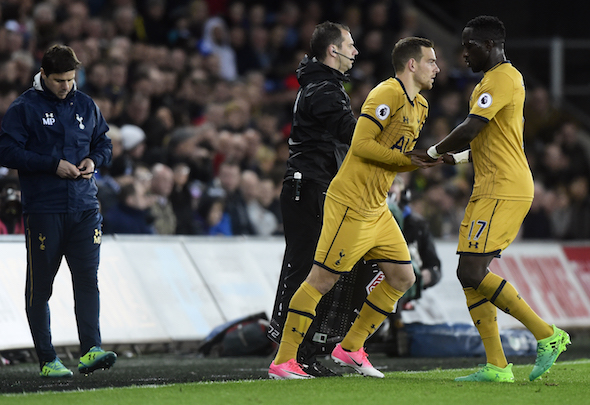 After winding up Mauricio Pochettino, Vincent Janssen is winding down his Tottenham career.

The striker, on a season-long loan at Fenerbahce, has had a miserable two years that are set to be followed by a permanent transfer from White Hart Lane.

There is surely no way back for him at Tottenham after failing to win over Pochettino, who has declined countless opportunities to sign the player’s praises this season (by contrast, he always speaks highly of another rarely-seen centre-forward Fernando Llorente).

Football London report that Janssen, 23, is in line to return to north London at the end of his Fenerbahce spell but he will not hang around for long.

It is said that Janssen is set to move on, either permanently or, less likely, on another loan.

Janssen had a torrid time at Spurs in his first season after signing for what the Daily Mail report was a fee of £18.5million to AZ Alkmaar in the summer of 2016.

He scored six goals in 39 matches for Tottenham last season – four of them from the penalty spot – and just three in 14 appearances for Fenerbahce in the current injury-ravaged campaign.

Janssen is a striker who came to Tottenham on the back of a great goal-scoring record in the Dutch Eredivisie but found he just couldn’t produce in the Premier League.

With Harry Kane blocking his first-team path, he didn’t get a sustained run in the first team.

But, when he did, the strapping six-footer looked lumpen and immobile, as well as less than sure of himself in front of goal.

Janssen has a Spurs contract that run until 2020, but even ace negotiator Daniel Levy will do well to make anything other than a loss on the Dutchman unless he starts banging in the goals soon.

Given the near-£20million fee spent two years ago, he will go down as a howler of a signing from Levy.