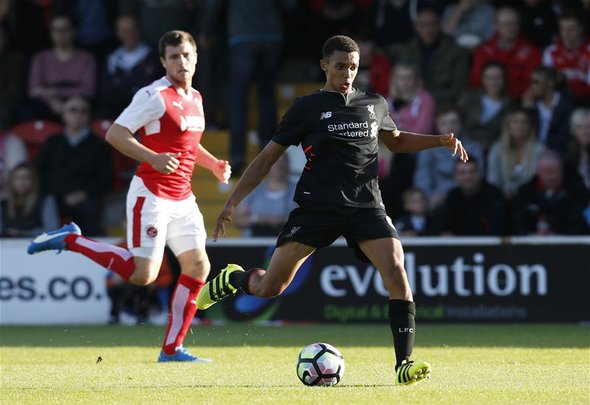 Trent Alexander-Arnold admits he still has a lot of work to do and he is not yet happy with where he is in his career.

The Liverpool youngster has burst onto the scenes this season after making his first team debut against Tottenham in the EFL Cup victory.

At right-back, he performed very well and was named in the competition’s Team of the Week despite making his debut at the age of just 18.

“I’m still young and I’m still learned every day but I still need to keep level-headed and progress because i’m far from the finished article,” he told LFCTV, as reported by the Liverpool Echo.

“I know there is a lot of hard work still to go and I’m willing to do it. I’m not settled, I’m not fully happy with where I am.

“I still want to progress, get into the first team and do what I plan to do.”

The 18 year-old has been training regularly with Liverpool’s first team squad, while playing for Michael Beale’s under-23s squad.

The youngster is a former under-18s captain and has always shown maturity and leadership throughout his development from the academy.

Alexander-Arnold likes to get forward from the full-back position and he’s already netted two goals this season for the under-23s against Tottenham and Sunderland.

He is likely to compete for a position in Liverpool’s first team for their EFL Cup quarter-final clash against Leeds later this month.

In other Liverpool news, Giorginio Wijnaldum delivered this tweet during Manchester United’s 2-1 defeat against Fenerbahce.