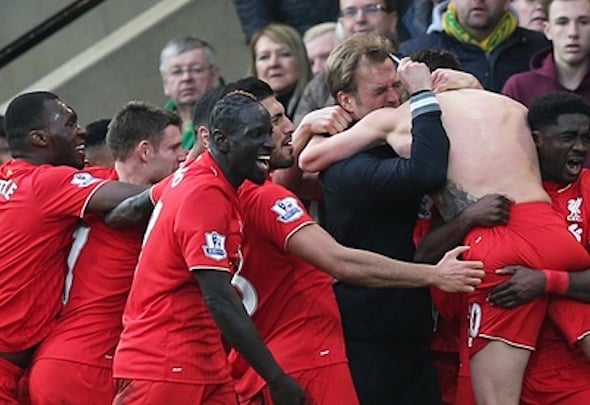 Liverpool have recorded the highest goal tally for a team after eight games in England’s top flight for 121 years according to a report.

Squawka released the data on Sunday morning, which claims that not since 1895/96 has the tally of 23 goals been reached by a side, with Jurgen Klopp’s men surpassing this incredible achievement with 24.

Their monstrous 24-goal-haul has come across both the Premier League and the League Cup, with five of the goals coming at home to Hull City in the Reds’ 5-1 demolition of the Tigers at Anfield on Saturday afternoon.

The Reds have had seven different goal-scorers this season, with four of these players scoring three apiece.

These four players are new summer signing Saido Mane, Philippe Coutinho, England’s Adam Lallana and full-back James Milner, whose composure from the spot has seen him net four penalties so far this season.

Klopp’s men will have a good chance to build on this goal glut next weekend as they travel to the Liberty Stadium to face a struggling Swansea City side.

The Reds have only failed to score in one game so far, which came in a harrowing 2-0 home defeat to Burnley on the second game of the league season.

They currently sit fourth in the Premier League, level on points with third-placed Arsenal.

In other Liverpool news, Odds slashed: Reds chances of a title-winning season cut by bookmakers.