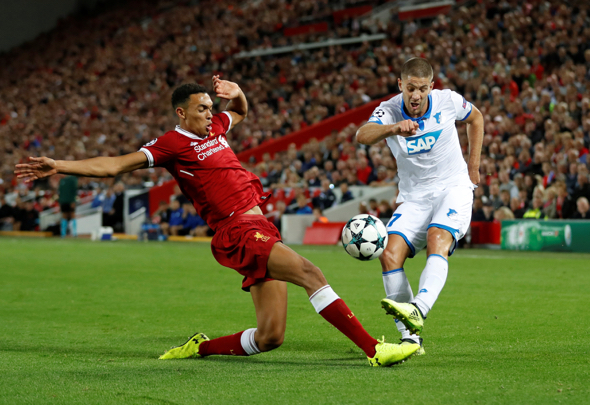 Liverpool fans are concerned about the defensive capabilities of Trent Alexander-Arnold ahead of next Wednesday’s Champions League showdown v Manchester City.

The right-back, 19, was tormented in the first half by Wilfried Zaha in Saturday’s 2-1 win against Crystal Palace just a few weeks after suffering at the hands of Marcus Rashford in the team’s defeat to Manchester United.

Alexander-Arnold’s positioning was suspect on a few occasions and Zaha took advantage to win the early penalty for Palace, which was converted by Luka Milivojevic.

The young defender is a virtual nailed-on starter for Liverpool’s biggest match of the season, the Champions League first leg against City at Anfield in three days’ time.

Joe Gomez is out injured and Nathaniel Clyne is in contention but has not had a single minute of senior action all season and is unlikely to be rushed back in for such an intense and demanding encounter.

Liverpool fans are extremely worried about how Alexander-Arnold will cope with Leroy Sane, the Man City left winger who has been in brilliant form for the Premier League champions-elect.

Concerned about TAA chances against Sane next week. Might be time to bring Clyne back into the mix? #lfc

TAA hs struggled against Rashford, Zaha in our last 2 away games. Wt Joe most likely out vs city, maybe Clyne should get a luk in. #lfc

It will be a big risk starting Clyne but just imagining TAA go against Sané… I won’t blame Klopp whichever way he goes. #LFC https://t.co/wOqe4YZkCg

TAA vs. Zaha matchup was maybe the most lopsided I’ve seen in some time. Everyone in the ground, including both players, knew where the ball was going and that Zaha would get his cross off. Terrifying. Clyne needed back ASAP. #LFC

Massive massive result that. More than rode our luck. TAA is a huge liability at RB for me. It’s worrying for City if they exploit it (which they will) ???? #LFC

Massive massive result that. More than rode our luck. TAA is a huge liability at RB for me. It’s worrying for City if they exploit it (which they will) ???? #LFC

Can’t believe we’ve won this game at all. Zaha ran TAA off the pitch, was sickening to watch. I suppose the “big teams” need to win these games they don’t deserve. Need to play 10x better against City ???? #LFC #YNWA