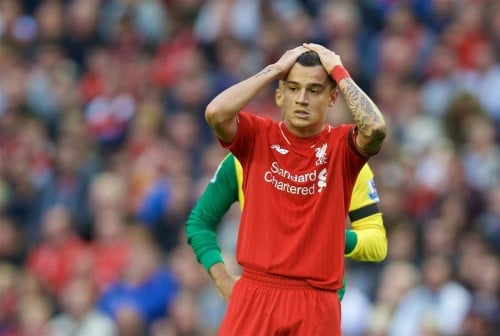 Philippe Coutinho was forced off in the first-half against Sunderland on a stretcher – and the Liverpool fans have voiced their concern on Twitter.

Liverpool fans are praying that his injury is not long-term as he is one of their star players.

The 24-year-old seemed in some pain after being tackled by Sunderland midfielder Didier Ndong inside the penalty area in the Premier League match at Anfield.

He was forced off in the 34th minute on a stretcher and had protective padding around his ankle.

It appears that Coutinho could have broken a bone in his foot or ankle, with a potential fractured metatarsal one scenario.

Coutinho could be out for up to two months if the injury is bad and would miss a busy Christmas period.

Oh no … anyone but Coutinho #lfc

This can't be happening. Someone please wake me up from this nightmare! #Coutinho #LFC

Ffs! That's not a little injury…Coutinho out for a while!!!

Damn it. Coutinho stretchered off in a leg brace whilst taking oxygen. Doesn't look good. #LFC

Coutinho would be a colossal blow to Liverpool’s title chances if he faces a long spell on the sidelines.

The Brazil international has been instrumental in the club’s strong start to the season and is regarded by many as a world-class player.

The attacker had scored six goals and supplied six assists in 14 appearances before the Sunderland match.

He has thrived in an attacking trio alongside Roberto Firmino and Sadio Mane, but forward Divock Origi replaced him as a substitute against Sunderland.

Coutinho has emerged as a fan favourite at Anfield since his arrival from Inter Milan in 2013, scoring 34 goals in 159 appearances for the Reds.

Liverpool are regarded as serious title contenders this season and have been at the top of the table already, but would be dealt a huge blow if their talisman is ruled out for a lengthly spell.

In other Liverpool team news, this is who the club’s supporters want to replace Mane in January.