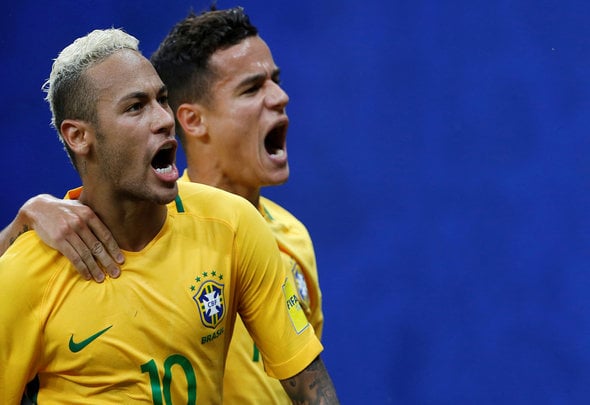 Philippe Coutinho played for Brazil in a World Cup qualifier against Uruguay – and the Liverpool fans were encouraged by his performance.

The 24-year-old has come under criticism in recent recent weeks after struggling to recreate his top form since his return from injury.

He played alongside Liverpool teammate Roberto Firmino for Brazil as they secured a comfortable 4-1 victory over Uruguay.

Liverpool fans will be relieved that their two players came through the match unscathed and were delighted by Coutinho’s display.

However, they have urged him to return to Anfield in top form after seeing his levels drop considerably recently.

Coutinho always looks like he has more pep in his step with the Brazilian shirt on. #Brazil #lfc

Watching @Phil_Coutinho, looking like getting back to himself. Unless Uruguay kick him to pieces.#LFC

Coutinho & Firmino who've both been off color at LFC, have seemingly found their form for Brazil, watch out Everton

Good to see Coutinho building his confidence, need him back to his best for the run in. #LFC https://t.co/bgCaeAhhi5

Coutinho is regarded as one the most technically gifted players at the Merseyside club and has proved his qualities since his arrival in 2013.

The playmaker has made 27 appearances across all competitions this season, scoring seven goals and supplying seven assists.

He has scored just once in his last 11 Premier League games and has been unable to produce his magic for Jurgen Klopp’s side of late.

Coutinho has been substituted off in the last three games and will be hoping he can return stronger after the international break.

The Reds resume their league campaign with a crucial match against Merseyside rivals Everton on 1 April and will be desperate to have Coutinho back to his very best.

In other Liverpool news, Jurgen Klopp has sent a message to the club’s youngsters.