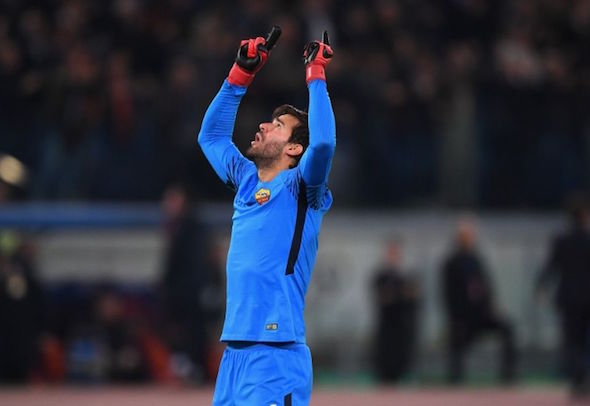 Liverpool have reportedly opened preliminary talks over a summer move to sign £62million-rated Roma goalkeeper Allison – and fans have lost their minds on Twitter.

Sky Sports News, citing sources in Italy, claim on their website that discussions are underway via an intermediary and at a very early stage as the Merseysiders look to reinforce their keeping ranks.
It is said that Liverpool hope to persuade Roma to sell Allison, 26, in the “coming weeks” after making initial enquiries during the January window about a deal.
Sky report that Jurgen Klopp’s side, who paid £75million for Virgil van Dijk last month, would likely need to pay a world-record price for a goalkeeper to land the Brazil international.
It comes at a time when Loris Karius has leapfrogged Simon Mignolet in the keeper pecking order at Anfield following rotation in that position this season.
Liverpool fans have reacted with delight on social media as plans to reinforce what has long been a problem position for the club are put into action.
Here is a selection of the best messages on Twitter:

I swear if we get Alisson this summer to go with Keita already coming in … pic.twitter.com/HaaXbTWFor

Hopefully more attempts for other too so we can have a smooth & effective window for once! Especially given World Cup so what will be a 3
Week window
— Dijkinho (@Dijkinho) February 15, 2018

Buzzing with the Allison News now just hope we can get it done ahead of the World Cup!!! #LFC

Sky report that Roma value Allison at £62million and are keen to tie him to a new contract as they anticipate intense interest from Europe’s top clubs in their prize asset in the summer window.
Liverpool have a shortlist of five goalkeepers ahead of the summer window and Allison, who has accumulated 22 Brazil caps, is the first choice.
Loris Karius has emerged as the new No1 at Anfield in recent weeks after taking over from Simon Mignolet, who has lost his place after a string of errors.
In other Liverpool news, fans will LOVE this brilliant Neil Lennon anecdote of Virgil van Dijk’s first Celtic training session.
Don’t miss out on breaking and exclusive Leeds news by clicking here for our brilliant 24/7 updates on Facebook, Instagram and YouTube.