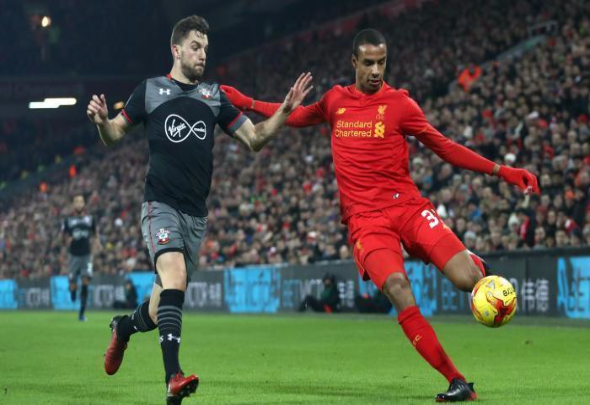 Joel Matip made his first start for Liverpool in over a month in their defeat against Southampton on Wednesday, but Reds fans on Twitter were disappointed with what they saw.

The 25-year-old was brought back into the defensive line for Ragnar Klavan, who was at fault for the Nathan Redmond goal in the first leg at St Mary’s.

However, the Cameroonian was unable to help the Merseyside giants pull back the one-goal deficit at Anfield as a late goal from Shane Long brought the same result and a 2-0 defeat on aggregate in the EFL Cup semi-final stage.

The performance from Matip across the 90 minutes was particularly noteworthy for supporters on social media as they felt he was beaten too easily on occasion, while offering little from set-pieces.

Sturridge simply doesn't fit into our front 3 the same way Mane does. Gini ahead of Can also. Matip was rusty as hell today. #LFC

Matip surely having his worst game in the red shirt #LFC

I don't believe in Matip's presence making us a good defensive unit. He's twice been beaten easy. TAA also being caught out a lot #LFC

Alec Arnie and Matip struggling. It's only matter of time. #LFC

Matip played next to rookie Trent Alexander-Arnold in the Liverpool defence, which could have played a factor in his poor display.

The 18-year-old was often caught out of position up the pitch, allowing Redmond a lot of free space to run into on the counter.

This then caused Matip to fall out of position and the match result ultimately brought an end to his unbeaten record in a Liverpool shirt when starting.

Fans will now be hoping their summer signing recaptures his early season form, as the defensive area has been a weak one for the Reds for a number of years now.

In other Liverpool news, here are three things we learned from the Reds’ defeat against Southampton.