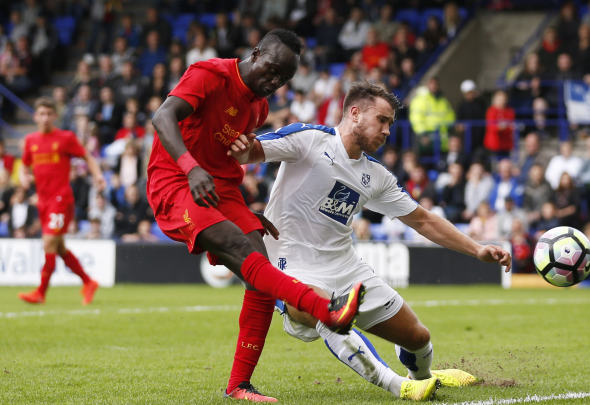 Liverpool demolished Barcelona at Wembley on Saturday – and supporters took to Twitter to praise star of the show Sadio Mane.

The summer signing from Southampton was widely hailed as the man of the match for spearheading the 4-0 win over the Spanish champions.

Mane opened the scoring with a tidy finish before a Javier Mascherano own goal and a strike from substitute Divock Origi put the game out of reach for the La Liga champions.

Marko Grujic added the fourth in stoppage time with a wonderful header to the delight of Jurgen Klopp on the sideline.

There were many fine performances from Klopp’s team but there was little doubt that Mane, who spearheaded the attack as the lone striker in the first half, was the architect of the win.
Supporters took to Twitter afterwards to praise the performance of the new boy.

Well that was fun! The score means nothing really but loads of good things about #LFC today. Mane MOM #preseason #LFCvBarca #LFCFCB

#Mane is going to be an absolutely baller for us this season, his pace and attacking attitude has been dreadfully missed at #Lfc

Mane brings the goals to the Yard. Damn right it’s better than yours. He could teach you but he would have to charge #lfc #YNWA. #lfcboston

What a game from @lfc vs @FCBarcelona – impressed with Sado Mane pic.twitter.com/yJz0hrdbtw

Mane, Grujic and Wijnaldum offer us so much more of a goal threat from midfield this coming season. #LFC

In other Liverpool news, Klopp has revived his bid to sign a Euro 2016 winner as he prepares to table a new offer.