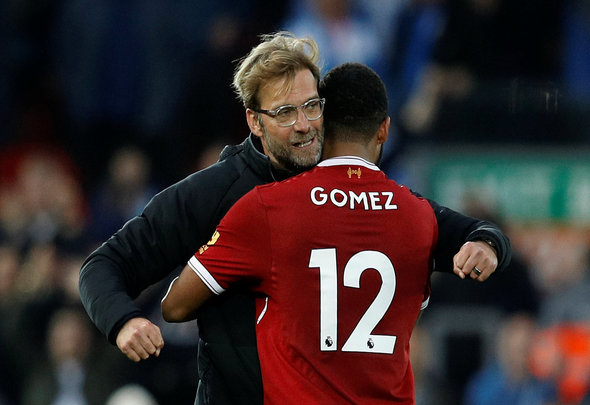 By Richard Parks
Liverpool defender Joe Gomez will eventually switch to the centre of defence, it has been confirmed.
Manager Jurgen Klopp explained in the wake of the Merseysiders’ emphatic 4-1 league win over West Ham on Saturday, as cited by the Independent, that he has a new role in mind for the England international.
“Joe Gomez is coming from the centre more, he will in the future play there,” said Klopp. “He has to improve but is more the defensive part for a full-back.”
Gomez, 20, has established himself as a key first teamer this season after overcoming the injuries that had stilted his progress following his transfer from Charlton Athletic in the summer of 2015.
He has made 27 appearances this season, 26 of them at right-back and one at left-back, as he has been rotated with fellow youngster Trent Alexander-Arnold on the right side of defence.
Gomez was an unused substitute in the demolition of West Ham as Alexander-Arnold was given the nod to play.
Football Insider verdict:
In what has amounted to his breakthrough season, Gomez has certainly not looked like a player who is being used out of position. He has been mightily impressive at right-back, offering more solidity than speed machine Alexander-Arnold without perhaps having quite the same effect bombing forward on the overlap. They have both been so good that Nathaniel Clyne, who has missed the entire campaign through injury, has not been missed at all. If Gomez continues to stay clear of injury, he has the defensive nous, positional sense and physical qualities to be a commanding centre-back in the future.
In other Liverpool news, Sky have claimed that the Merseyside giants have already made phone calls about signing BRILLIANT Tottenham player this summer.
Don’t miss out on breaking and exclusive Liverpool news by clicking here for our brilliant 24/7 updates on Facebook, Instagram and YouTube.