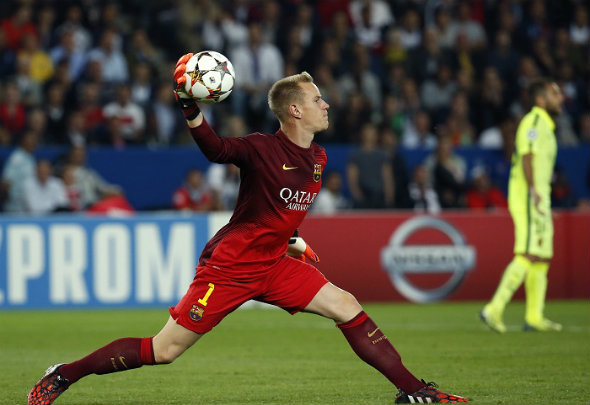 Barcelona are keen to hold on to Marc-Andre ter Stegen this summer by offering him a new contract, according to a report.

Spanish media outlet Don Balon have claimed that the Spanish giants are keen to retain the services of the 23-year-old goalkeeper.

Ter Stegen has played second fiddle to first-choice Claudio Bravo in the past two seasons and speculation has been increasing that Liverpool and Manchester City are locked in a two-way battle to sign him in the summer.

A vast majority of ter Stegen’s appearances this season have come in the cup competitions and the Germany international has hinted he is unhappy with being second in the pecking order for league matches.

However, Don Balon report that the Spanish league and Champions League holders are willing to offer the former Borussia Monchengladbach improved terms and the promise of more first-team football in the future.

The news could be a blow to Liverpool boss Klopp, who has been heavily linked with a summer swoop for Ter Stegen, while Man City are also said to be closely monitoring him.

However, suggestions that a deal is done with City have been strongly refuted by the player.

“It’s not true that I have signed for Manchester City,” ter Stegen said, as quoted by Don Balon in the wake of Barcelona’s midweek Champions League win over Atletico Madrid. “At the end of the season we will see what the situation is, and we can talk again then, OK?”

Liverpool’s current first-choice goalkeeper Mignolet has just signed a new five-year contract, but has followed up Klopp’s renewed faith in him with some high-profile errors.

Mignolet’s erratic form has sparked speculation that Klopp will dip into the transfer market in the summer in a bid to replace the Belgian.

In other Liverpool transfer news, the Reds have made an offer for an Argentine striker.