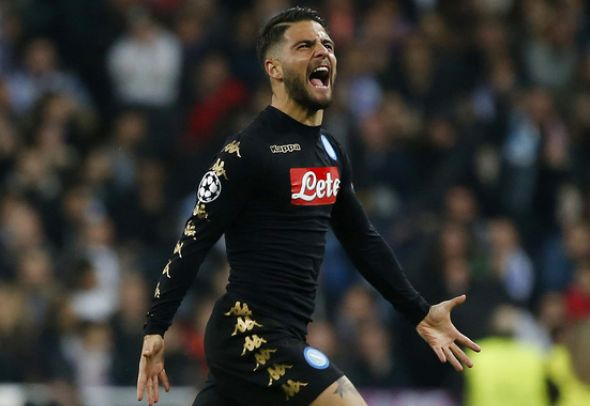 Liverpool have set their sights on Napoli attacker Lorenzo Insigne as a potential replacement for Philippe Coutinho, according to a report.

The Mirror claims that the Serie A giants will be reluctant to let the 26-year-old leave with the start of a new season just on the horizon and rate their star at a stunning £60million.

However it is understood that if Barcelona complete a £100million raid for Coutinho, Jurgen Klopp could use his newly-found financial muscle to tempt Napoli into letting their main man leave.

Although he signed a five-year deal in January, it is reported that Coutinho has handed in a transfer request to leave Anfield in light of Barcelona’s interest, and although it was turned down by the Reds, Klopp doesn’t want to upset the dressing room.

Insigne showed last season that he could be an ideal replacement for Coutinho.

The 16-times Italy international proved himself to be a goal machine on the wing as he netted 20 goals and supplied 12 assists in 49 appearances across all competitions.

The Mirror reports that Insigne isn’t the only player in continental Europe that is on Jurgen Klopp’s radar as a contingency for what is deemed as an “inevitable” departure for Coutinho.

Schalke wonderkid Max Meyer is also said to be on Liverpool’s shortlist having rejected a new contract with less than a year left to run on his current deal.

Tottenham are also reported to be in pursuit of the 21-year-old German.

If Liverpool decide to sell Coutinho, which it seems like they will, they should focus on spending more of that money on improving their defence. The 3-3 draw with Watford on Saturday exposed that the rearguard is still a major flaw for the Reds. Virgil van Dijk’s move to Anfield must be push through first and then Klopp should look to add a new goalkeeper and a new holding midfielder who can be seen as a leader. Coutinho’s replacement can wait. Mohamed Salah, Sadio Mane, Divock Origi, Daniel Sturridge and Roberto Firmino are all versatile to fill in for one another in the front three, so it is not urgent to replace Coutinho at this stage. Insigne is a great player but is also very expensive. Meyer could be a cheaper option as he is in the last year of his contract and isn’t as proven at top-level football.

In other Liverpool news, the Reds are battling Newcastle for this teenage striker who is dubbed as the next Andy Carroll.