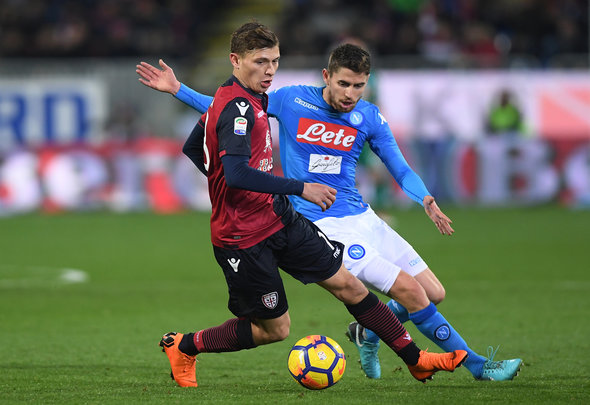 Liverpool have been named as favourites to land the highly-rated Napoli midfielder Jorginho from the Serie A side, according to a report.

The Mirror claim that Jurgen Klopp wants the Brazilian/Italian dual nationality player, who he sees as the replacement for Emre Can, as the German’s contract expires in the summer and is looking for another club.

Both Manchester United and Arsenal are eyeing the 26-year-old rated at £50million by the Italian outfit, but the Mirror claim Liverpool will be favourites in a three-way fight.

Jorginho is under contract to Napoli until 2020.

The defensive midfielder has four goals and four assists this season in 32 outings from the centre of the park.

Reds supporters will get a chance to see their potential new arrival when England face Italy at Wembley on the 27th March.

This potential transfer has been building in momentum since it became apparent that Can would be off in the summer, and Jorginho’s is a name which has been continually mooted as a replacement. At 5ft 9in, the Italian international is hardly an imposing figure to have in the midfield zone, but then again Can managed to dominate the area and he’s only slightly taller. The 26-year-old has been key to Napoli’s push for the Serie A title this season and their battle with Juventus for the championship. The Reds can offer the Brazilian born star Champions League football which will undoubtedly be in the player’s mind when it comes to choosing his new club.