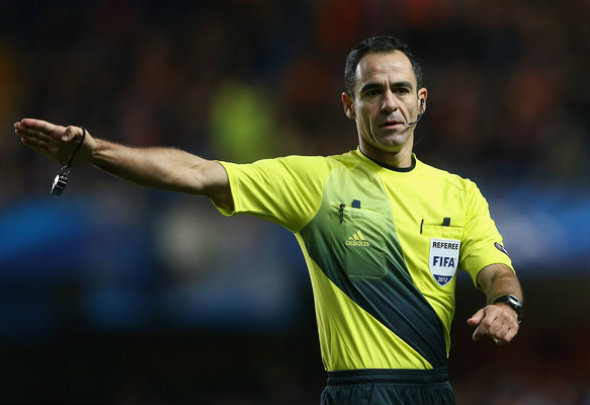 The referee officiating the latest installment of one of football’s fiercest rivalries on Thursday has shown 80 cards in his last 12 games.

Carlos Velasco Carballo is the man with the whistle as Liverpool clash with Manchester United in the last 16 of the Europa League.

The Spaniard has been refereeing in La Liga since 2004 and has been trusted with key matches in the past such as the World Cup tie between Brazil and Columbia in 2014 and the Europa League final in 2011 between Portuguese rivals Porto and Braga.

His last game however saw him brandish eight yellow cards and a red during a La Liga clash between Malaga and Deportivo de La Coruna.

That game ended 3-3 and it is a sign of a changed Carballo since the World Cup in Brazil.

His leniency in the feisty encounter between Brazil and Colombia was widely criticised after Colombia’s Juan Zuniga ended Neymar’s tournament with a reckless challenge from behind.

Zuniga avoided picking up even a yellow and it seems as though Carballo has hardened up since then.

In Carballo’s last four La Liga games he has reached for a yellow an incredible 29 times and sent off a player in each of the matches.

Despite a traditionally high card count whenever Liverpool and their historic rivals meet, the two clubs have had an excellent season disciplinary wise.

United’s first red card came at the weekend when Juan Mata was sent off after a second yellow against West Brom.

Liverpool have only had two sending offs, but James Milner was dismissed for only the second time in his Premier League career against Crystal Palace on Sunday.

There have been plenty of red cards shown between the two rivals with the most famous recent incident happening when Steven Gerrard was given his marching orders just 38 seconds into his last appearance against United as a Liverpool player.

In other Liverpool news, the Reds have been boosted by the news of United’s injury concerns ahead of the game tonight.