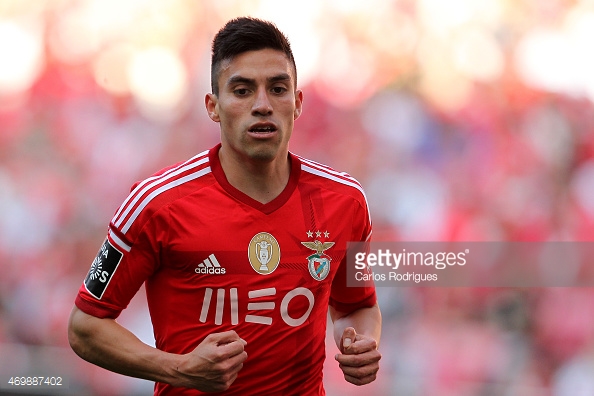 Football Insider has learned that Liverpool are also keen on making a move for the Argentina international, who is expected to leave Benfica in the summer.
The Merseysiders have already been active in this summer’s market, completing a deal for James Milner earlier this week and finalising the capture of Danny Ings from Burnley.
United are working on a deal to capture Gaitan after being given encouragement that the player is keen to move to Old Trafford this summer.
Manager Louis van Gaal is an admirer of the qualities of attacking midfielder Gaitan, who is valued at around £22m by Benfica.
He has won nine Argentina caps and is highly regarded in Portugal, where he has flourished since becoming Benfica’s third most expensive signing when he joined from Boca for £6m in 2010.
United want to use Nani in part-exchange for Gaitan as the Portugal international does not figure in Van Gaal’s plans for next season.
The 28-year-old winger has just completed a season-long loan with Sporting Lisbon but is not expected to sign a permanent deal with his former employers.
United are trying to sign Gaitan after completing a deal for winger Memphis Depay last summer. As revealed by Football Insider, United are prepared to spend £200m this summer to provide Van Gaal with a squad that can win next season’s Premier League title.