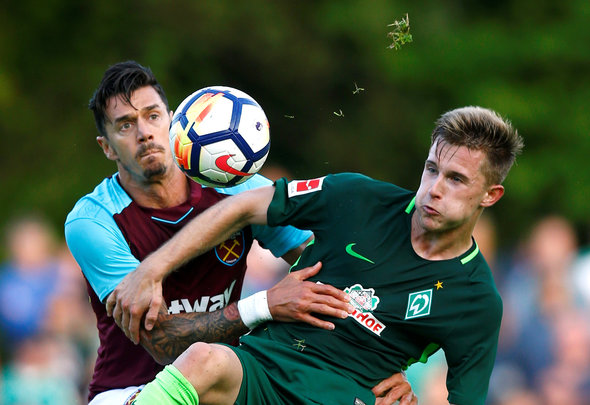 Bleacher Report journalist Dean Jones claimed on his personal Twitter account on Monday that Palace are lining up an £8million move for Fonte, 33, after West Ham suffered a humiliating start to the Premier League season.

The Eagles’ start to the campaign has been no better than the Irons’, but they have turned their attention to Fonte in a bid to bolster their stuttering defence after the Portugal international has played just once in Slaven Bilic’s squad so far this term.

Fonte was signed by the Hammers from Southampton in January but has widely been regarded as a flop after he failed to reach the level of performances he showed on the south coast.

He has made 17 appearances across all competitions for the east London side, but has been left on the bench in three of their four first fixtures of the 2017/18 campaign.

The Euro 2016 winner, who is one of the more senior players at West Ham, spent three years with Palace between 2007 and 2010 before he was snapped up by the Saints.

West Ham and Crystal Palace have both been woeful in their opening Premier League fixtures. Bilic and Frank De Boer both need to sort out their defence in the next few days and it seems that the Palace boss has already set his sights on Fonte. The Hammers should definitely sell up. £8million for a player who is clearly past his best and approaching the end of his career is too good to turn down. That money should then be used to bring in someone else who is younger, suited to the Premier League and can walk straight into the first-team. Bilic will find himself sacked before the end of September if he doesn’t solve his defensive crisis.

In other West Ham news, this player who has recently signed for the Hammers has blasted Bilic for a crucial tactical blunder.