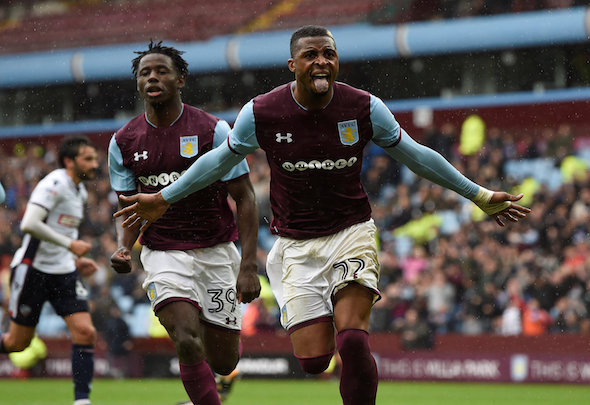 The 27-year-old notched up his first goal of the new season on Saturday afternoon and it turned out to be the winner as Villa beat Bolton 1-0 to secure a third consecutive home victory in the Championship.

The striker scored from the penalty spot just moments after missing a golden opportunity to put his side into the lead.

Kodjia has only featured in five matches this season after recovering from a serious ankle injury in the latter stages of the previous campaign.

Speaking to the Birmingham Mail after the game, Bruce was quick to praise Kodjia’s display but also mentioned that he needs to improve on his decision making.

“It is good to see him physically fit because he will get better and we know he is a threat,” he said.

“He produces a bit of magic but then should have passed one and that’s the way he plays.

“At times he should pass it when he shouldn’t and other times he looks like a world beater.

“He had the courage after the mistake he had made a minute before to stick it into the back of the net which is good.”

Although the striker has still yet to complete 90 minutes, Villa are unbeaten in the matches when he has started in the league this season, winning four and drawing once.

Kodjia enjoyed a sensational debut campaign at Villa Park last season, finishing as the club’s top goalscorer in all competitions with 19 strikes to his name.

The striker is currently on international duty with the Ivory Coast national squad who face Mali and Morocco in the upcoming World Cup qualifiers.

In other Aston Villa news, Simon Jordan has taken a swipe at McCormack after his exit was announced.