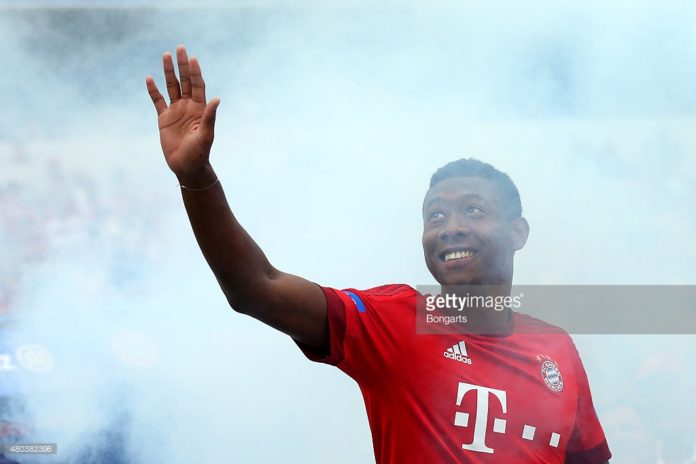 By Arsenal correspondent Tony Hughes
David Alaba’s versatility is as eye-catching as his achievements.

Weeks after blowing out 23 candles on his birthday cake, the Arsenal target has quite legitimate claims to be the world’s most complete footballer.
While regularly topping polls for being Europe’s most accomplished left-back, the Bayern Munich star was simultaneously starring for the Austria national team in central midfield and as a playmaker in the No10 role.
Last season, Pep Guardiola’s second at the Bundesliga champions, Alaba was used with great success in new club roles in central midfield and at centre-back in a three-man defence.
It is little wonder he is attracting attention from the planet’s elite clubs. Intriguingly, Arsenal are one of them. As revealed by Football Insider on Monday, the newly-rich Londoners are keeping close tabs on the 23-year-old Austrian.
With three years remaining on his Bayern contract, Alaba is rated in the £30-million-plus bracket.
Not that Guardiola would want to lose such an exceptional player, one he holds in the same esteem as the feted Philipp Lahm.
When fit, Alaba is a nailed-on starter for the all-conquering Bavarians.
Technically excellent, tactically astute, energetic, quick and with equally well-honed defensive and attacking instincts, he can slot in virtually anywhere on the pitch. Calm and composed, Alaba can pass, run, create and score goals.
Remarkably, while playing in an ostensibly defensive role for his club, he was Austria’s top scorer in their 2014 World Cup qualifying campaign with six goals after being pressed into a withdrawn striker role.
Alaba is not only Austria’s finest footballer, winning the Austrian Footballer of the Year award four years in a row, he is arguably the country’s outstanding sporting figure. In 2013 and 2014, he won Austria’s Sports Personality of the Year award.

Alaba joined Bayern from Austria Vienna aged 16 and, following a successful loan spell with Hoffenheim, first established himself as a regular in the Bayern XI as a 19-year-old during the 2011-12 season under Jupp Heynckes.
By the time Bayern were crowned European champions at Wembley in 2013 he was being hailed as the world’s finest left-back.
Under Guardiola, Alaba initially thrived as an advanced left-back but, encouraged by the player’s performances for his country, the imaginative Spanish manager did not typecast him.
Last season, with new signing Juan Bernat slotting in capably to his former role, the shackles were permanently lifted from Alaba and he was used, with great success in central position, both as one of three defenders and as an advanced midfielder alongside Lahm in Guardiola’s classic 4-3-3 formation.
Alaba’s pedigree is not in doubt. Can the same be said about his immediate future as Wenger casts covetous glances?

Asked in the summer about his future, Alaba said: “Deep inside me, there are certainly clubs I might imagine playing for one day, but I’m not worrying myself with such things.
“Even after seven years at Munich, I still feel great there and want to achieve a lot of things with Bayern.”
He missed major parts of the 2014-15 season, first sustaining a partially torn ligament in his right knee in November 2014 and then suffering a torn medial collateral ligament in his other knee in late March. Both injuries sidelined him for around two months.
He is now fit and playing a full role in Bayern’s pre-season preparations. Arsenal are watching him closely.