The former Manchester City and England defender, speaking exclusively to Football Insider assistant editor Russell Edge, says that the Swedish giant would be a massive boost to the Lilywhites both on and off the pitch, as well as being a financially sound deal for Daniel Levy to sanction.

LA Galaxy confirmed that the Swedish international would not be returning to the MLS side for the 2020 campaign, leaving him a free agent heading into the January transfer window.

With Harry Kane the only senior striker at Mourinho’s disposal, Mills says that a deal for Zlatan would bring huge benefits both to the first-team squad as well as lifting spirits around the whole club.

Mills told Football Insider: “How about Zlatan to Tottenham? Who’s the backup striker to Harry Kane? They haven’t got one.

“He’s unattached, he’s left the MLS, he’s a free agent and as ludicrous as it sounds, think of the experience that he’s got and everybody talks about when he went to Manchester United, what he added to the dressing room, the work ethic that he’s got.

“I’m not saying he’s going to go in and replace Harry Kane, but he would be one hell of an option as almost a player-coach role type scenario. He’s obviously revered all over the world, I think he’s got enough confidence to pull it off.

“From Tottenham’s point of view he’s a marketing dream, he’s going to sell a lot of shirts very, very quickly, he loves Mourinho to bits. You just start to think, is it a possibility to bring a player like that in to give them a bit of a boost?”

Ibrahimovic played 100 times under Mourinho during their time together at Inter Milan and Manchester United, scoring 58 goals in total for the Portuguese boss.

The 116-cap hitman, who scored at a rate of a goal-per-game in the MLS this season, has 33 Premier League appearances and 17 goals under his belt.

In other Tottenham news, Football Insider can reveal that Pochettino was left fuming with Daniel Levy after a £10million agreement at Spurs. 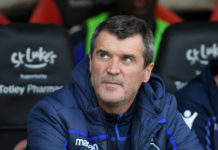