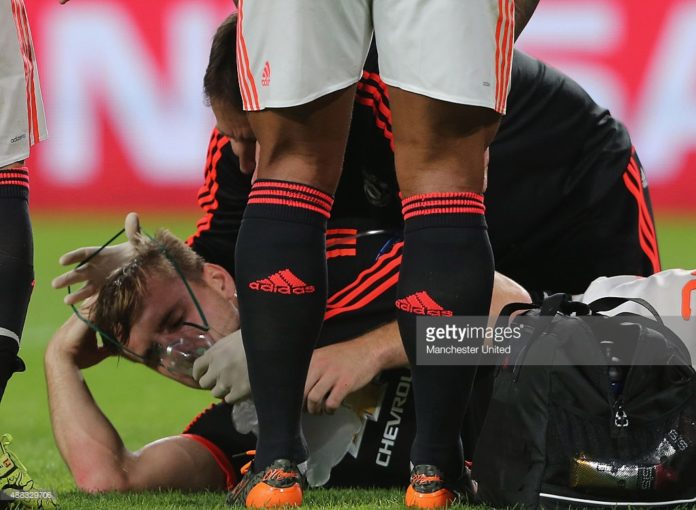 EXCLUSIVE | By Manchester correspondent Alex Stevens
Manchester United fear Luke Shaw will not play again this season after he had an operation on Wednesday morning to repair a double fracture of his right leg.

Shaw needed nine minutes of treatment on the pitch following a two-footed challenge from Hector Moreno in the 15th minute of United’s 2-1 Champions League defeat to PSV Eindhoven on Tuesday night.
He underwent surgery at the St Anna Ziekenhuis hospital on the outskirts of Eindhoven in the early hours of Wednesday morning and will spend the next couple of days in Holland before he is allowed to fly home.
Manager Louis van Gaal said he hopes that Shaw will play again this season but, such is the severity of the injury, privately United staff do not expect the England international to feature again in 2015-16. He is also almost certainly out of next summer’s European Championships in another injury blow to England boss Roy Hodgson.
Speaking after the match on Tuesday night, Van Gaal said: “Luke has a double leg fracture so he is in the hospital.
“I am not a doctor, so I cannot say [how long Shaw is out for], but when you have a double fracture it is for six months to see how it develops.
“So he won’t play in the group stage any more. But I hope that he will play again this season, of course.”

Asked about his thoughts on the 20-year-old suffering such a horrible injury, the veteran manager said: “It is awful. The boy who comes at 18 years old to Manchester, has a very difficult season and next season, his second season, he plays fantastic, then this happens.
“When he was going in the dressing room he was wearing the oxygen mask and was crying.
“You can judge for yourself [on the tackle]. When I say it is a penalty and a red card then I am a bad loser. It was a very bad tackle I think, with two legs.”