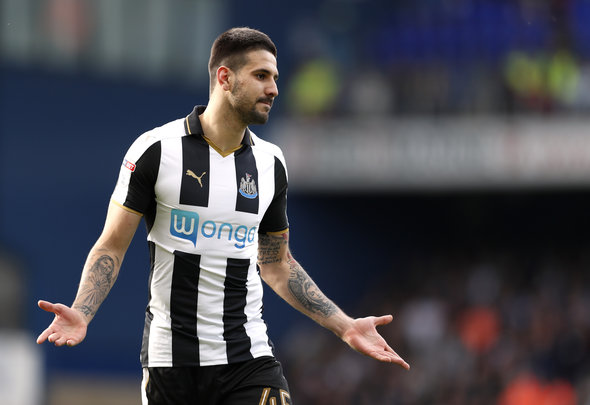 Newcastle United have received an improved offer for Serbian international striker Aleksandar Mitrovic, according to a report.
The Newcastle Chronicle detailed the news as they revealed that Belgian champions Anderlecht had come in with a bid for the Magpies forward.
However, manager Rafa Benitez will not allow the 23-year-old to leave for less than £15million and even then the Tyneside outfit must have a replacement in place.
However, if the offer was right, it could kick-start Newcastle into action for a striker of their own, with funds tight.
The odds on Mitrovic moving to Anderlecht have plunged today and they’re now just evens to secure his services with Ladbrokes.

The forward is thought to be unhappy with life at St James’ Park but after only recently recovering from a back injury, the boss has told Mitrovic that he will be given minutes if he remains at Newcastle.
Anderlecht previously made an attempt to resign the forward on loan but that was turned down by the club and Brighton previously had a £7m bid rejected.
Football Insider verdict:
This deal will go right down to the wire as it requires Newcastle to have a ready-made replacement for the forward, which seems unlikely at this rate. Mitrovic is a talented forward and at the age of 18 was considered one of the top ten players in European football under the age of 19. Unfortunately for the Magpies, the Serbia international is unhappy at St James’ Park and a move looks necessary to reignite the spark in the striker. Newcastle are desperate for goals right now but it would seem that Mitrovic is unlikely to fire the north-east outfit away from the relegation zone in his current form. That means Newcastle will need to get one of their top targets before the transfer deadline expires.
In other Newcastle United transfer news, Magpies ready to offload fan favourite after £57million deal wrapped up.