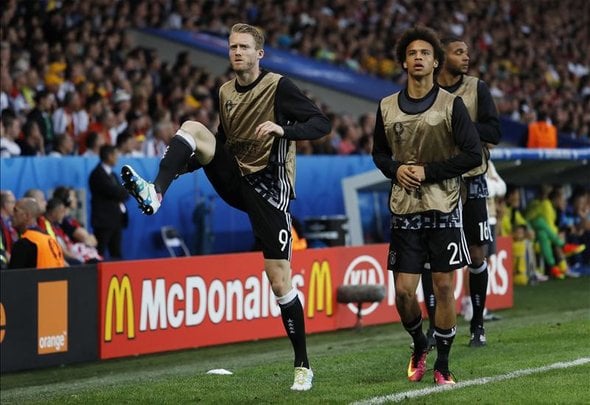 Arsenal have registered their interest in Leroy Sane but face a battle to beat Manchester United to the German sensation, according to a report.

German publication Sport Bild claim City are prepared to pay up to £42millon to land the winger this summer.

It is said there is also said that heavyweights Paris St-Germain, Barcelona and Bayern Munich will fight the Premier League giants to sign the 20-year-old.

New Schalke manager Christian Heidel has told the midfielder to make up his mind about his future when he returns to his club side after international duty with Germany.

“Leroy Sane must make after the European Championship a decision regarding his future. For Schalke 04 takes a certain predictability, “Heidel said in an interview with Sport Bild. “We have always made it clear that we would be pleased if Leroy Sane remains at Schalke.”

The big clubs are circling around the 20-year-old, who is regarded as one of the hottest young prospects in Europe despite being only a bit-part player for his country at Euro 2016.

His national side are preparing for a semi-final against hosts France on Thursday, although Sané is yet to feature in the tournament so far in what is a highly competitive German squad.

The midfielder who plays predominately as a winger, helped guide Schalke to a 5th placed finish in 2015-16 and chipped in with eight goals in 33 appearances.

Meanwhile Arsene Wenger is yet to dip in to his transfer kitty this window and Sané could be a serious option for the London club.

In other Arsenal news, they have opened talks on mega-money striker deal but have been told they must pay another £37million.