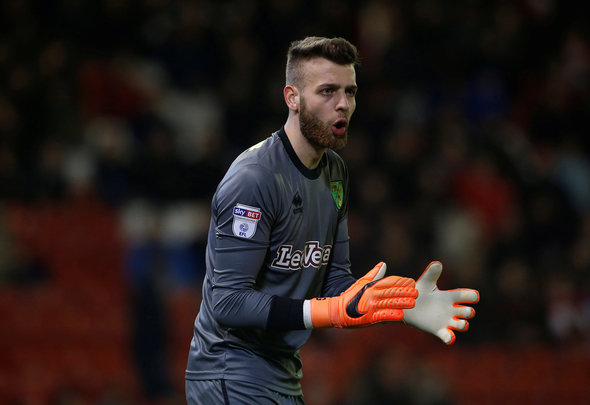 Celtic have been linked with a move for Manchester City goalkeeper Angus Gunn who is currently on loan in the Championship with Norwich City, according to The Sun.

The 22-year-old has impressed during his spell with the Canaries which has led to speculation surrounding his future with Stoke City also in the hunt.

With Scott Bain currently between the sticks in place for the injured Craig Gordon, it’s highlighted the need for a quality arrival and Gunn fits the bill.

If Brendan Rodgers did pull off a move for the City man, it would see Gunn join Patrick Roberts, who is also at Parkhead on a temporary deal from the Sky Blues.

The stopper would be given the number one jersey and have the chance to test himself on the European scene with the prospect of playing Champions League football.

Stoke are looking nailed on for relegation from the Premier League, so it’s doubtful whether a move to the Brittania could be considered progressive.

But Manchester City fans are not keen on seeing the 22-year-old exit the Etihad for the Scottish Premiership as they don’t see how a move north of the border will benefit the stopper.

Here is what supporters of the English champions-elect had to say about the transfer speculation:

Celtic are a shit club in a shit league. Suitable for 2nd rate players like Boyata & Sinclair but not for players with potential

Won't be tested in Scotland , 1 team league. And then get battered in champs league hardly good for confidence and experience. Go to a prem team on loan.

No! Hands off our Angus Gunn, Brendan!

@AngusGunn01 is top class and deserves a top flight club. Not sure about the Scotland bit though ::))

In Celtic news, huge blow as Celtic mainstay ruled out until the end of the month.