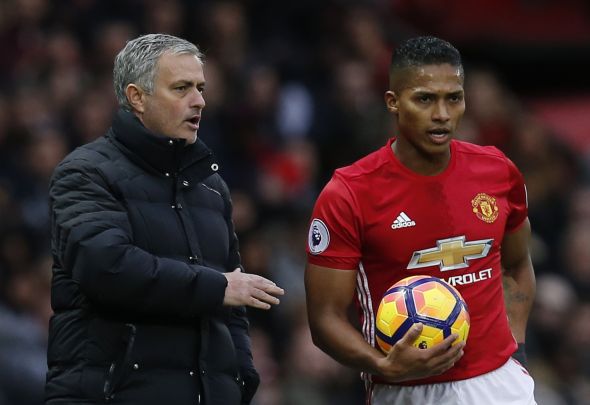 Jose Mourinho is set to hand Antonio Valencia a return to the Manchester United side after serving his one-match suspension.

The 31-year-old missed Wednesday night’s 2-1 win away at Crystal Palace but is set to return on Saturday evening to face West Brom at the Hawthorns, as Eric Bailly drops out with a knee injury.

Lining up on the right side of the United defence, the Ecuador international is the only change to Mourinho’s side after their midweek triumph.

Frenchman Anthony Martial is expected to return to the bench after being left out of the squad to face Crystal Palace on Wednesday.

Captain Wayne Rooney takes his place on the left of a free-flowing 4-3-3 system, as he looks to equal Sir Bobby Charlton’s 249 goals at United.

Holland international Daley Blind continues at left-back instead of Luke Shaw, who is still nursing a foot injury.

Italian Matteo Darmian had been playing on the left side of defence, but had looked shaky out of position prompting Mourinho to choose Blind against Palace.

All eyes will be on Marcos Rojo, after a number of overzealous challenges against Everton’s Idrissa Gueye and Palace’s Wilfried Zaha have brought his tackling into question.

He partners Phil Jones in front of goalkeeper David de Gea, while Michael Carrick will continue his sparkling form at the base of the United midfield.

The veteran’s presence in the side allows Paul Pogba and Ander Herrera to get forward, as he looks to continue an eye-catching run that has seen him win 10 of his 12 league and cup appearances this term.

Record signing Pogba scored and assisted Zlatan Ibrahimovic against Palace, as he begins to justify his astronomical fee alongside Herrera.

Juan Mata starts on the right as Henrikh Mkhitaryan continues to recover from an ankle injury picked up against Spurs, while Ibrahimovic will be expected to add to his six goals in six games.

Tony Pulis’ Baggies have defied pre-season expectations of a relegation scrap, as they sit in a lofty seventh place and will be hoping for an upset on Saturday evening.

In other Manchester United news, Tony Cascarino has had his say on Rojo.