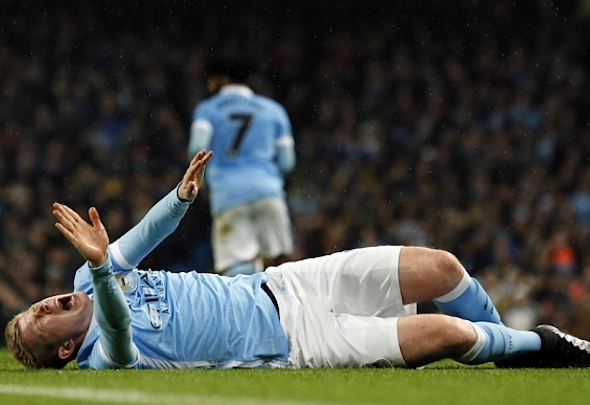 The Belgium international was stretchered off the pitch with his knee in a brace late in Wednesday night’s clash at Etihad Stadium.

“I’m optimistic he won’t be out for the rest of the season,” Pellegrini said. “We’ll see how important the damage is. It’s not the cruciate ligament.”

“The doctor thinks, but he cannot be sure, that it’s a problem in his medial ligament.”

A player is typically sidelined for a minimum of nine months after tearing a cruciate ligament but the recovery time for a medial ligament is much shorter, often around three months.

Second-half substitute De Bruyne had scored one and created the tie-clincher for Sergio Aguero as City came from 1-0 down in the second leg to win 3-1 on the night and 4-3 on aggregate.

But De Bruyne’s knee buckled as he fell to the ground at the 88-minute mark and he screamed in agony as he slumped to the turf.

The attacking midfielder had lengthy treatment before leaving the pitch on a stretcher to muted, concerned applause.

De Bruyne will undergo tests at City’s training headquarters on Thursday amid fears he could be out for months.

City will now face Liverpool in the League Cup final at Wembley on 28 February.