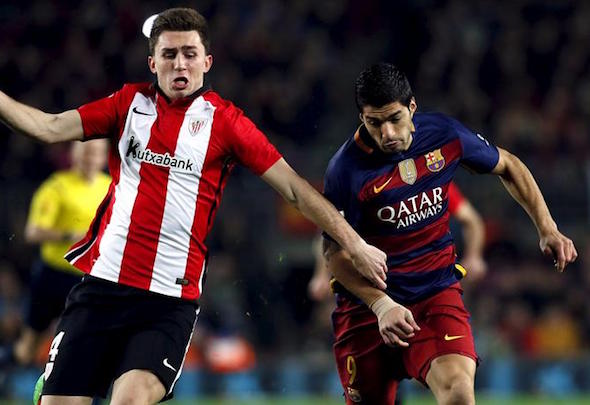 Manchester City will herald the start of the Pep Guardiola revolution by signing a second star within days to take the club’s summer spending up to a staggering £60.4million, Football Insider sources understand.

Athletic Bilbao defender Aymeric Laporte has agreed to join City in a deal costing £38.6million and the transfer is set to be finalised in the next week.

Midfielder Ilkay Gundogan was announced as a City player on Thursday morning after he signed from Borussia Dortmund.

As Football Insider revealed on Tuesday, City will pay around £21.6million deal for the Germany international.

They are now set to secure the capture of Laporte after agreeing to meet the full £38.4million release clause in his Athletic contract.

A City source has told Football Insider that the Frenchman, 22, has settled terms with the Premier League club and they are now finalising the paperwork on the transfer.

Guardiola has sanctioned both signings before formally taking the reins at Etihad Stadium.

Laporte has been targeted after emerging as one of the most promising young centre-backs in Europe.

He has been a mainstay of the Bilbao team this season, playing virtually every minute of their La Liga campaign to convince City to pay the full release clause of his contract.

There had been some doubts over whether City would opt to conclude a transfer with Borussia Dortmund for Gundogan after the Germany midfielder suffered a dislocated knee cap earlier this month that will prevent him from playing at Euro 2016 and force him to miss the start of next season.

But incoming manager Guardiola has not been put off by Gundogan’s lay-off and asked the club to push ahead and complete his first signing at the Etihad Stadium.

The fee is set to be worth a total of £21.6 million including performance-related add-ons.

“When I learned of City’s interest, my heart was set on coming,” Gundogan said. “Things have moved very quickly.”

Begiristain added: “He is an intelligent and versatile midfielder who can operate in a number of different roles. He will be a very important player for us in the coming years.”

He signed a contract extension last summer but it is due to expire in 12 months and the German club decided to cash in once it became clear the player wanted to move.

In other Manchester City transfer news, the 2014 Premier League champions have opened preliminary talks to sign a striker who scored 39 goals for his club this season.