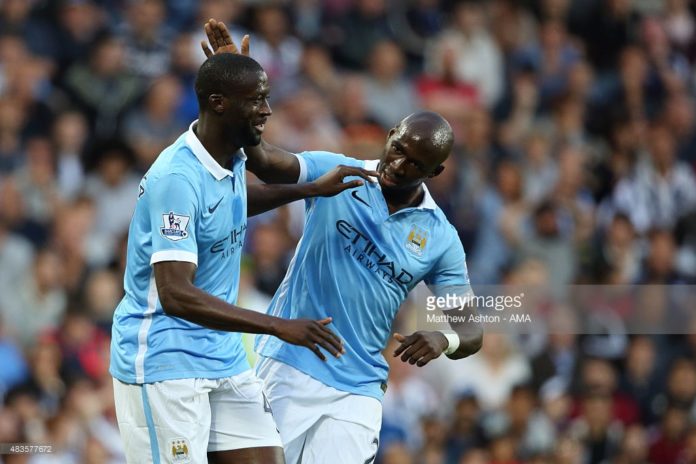 By Manchester correspondent Alex Stevens
Manchester City will not win the Premier League this season with Yaya Toure playing the whole campaign in central midfield.

Yes, the Ivorian powerhouse was the driving force behind City’s 3-0 win over West Brom on Monday.
Yes, he scored two goals and looked eager and motivated again following his disinterested performances at the end of last season.
And, yes, he produced plenty of those eyecatching bursts when he motors forward with the speed of a runaway train and the force of a tank.
But the question marks that linger over Toure’s role do not relate to home matches against mid-ranking sides where Manuel Pellegrini’s team control possession. His unique version of brutal artistry comes to the fore on such occasions.
It is in the marquee fixtures, against domestic and Champions League rivals, and tricky away games where doubts linger as to Toure’s ability to function effectively in a two-man central midfield.
It is a position in which he started the new campaign on Monday, operating impressively alongside Fernandinho in the same partnership that was so crucial to City’s 2013-14 Premier League triumph.
For City supporters antagonised at his second consecutive summer of threatening to leave before eventually realising that the grass is actually greener at home, it was comforting and also thrilling.
But what did it actually tell us? That the dominant midfielder in the Premier League in recent years is no longer a liability in the central domain in which he once stood like a colossus? Hardly.
It is not headline news to learn that Toure is reluctant to track runners and do the hard yards that all midfielders must when their team does not dominate possession. The explosive pace and drive is held in reserve and the switch is flicked only when he is making forward bursts.
It would be hugely optimistic to think that Toure, who turned 32 in May, can drive City to a third title of the Sheikh Mansour era while operating in front of the defence.
He remains a force when his team control possession but he is no longer capable of a operating as part of a central midfield duo against the very best.

The obvious future role for a player who remains a matchwinner on his day is in the No10 position behind a centre-forward where he can influence matches with his vision, passing and considerable goalscoring threat.
The problem at City is that David Silva is earmarked for that role, and conducted the orchestra with aplomb from behind Wilfried Bony on Monday.
Another playmaker, Kevin de Bruyne, is closing in on a move from Wolfsburg that will cost the club nearly £50million. The Belgium international is not being bought to sit on the bench.
Toure is unlikely to get too many opportunities behind the centre-forward. It appears Pellegrini will continue to use his colossus in a deeper role.
But City cannot expect this particular leopard to change his spots. Or drive them to the title from there.