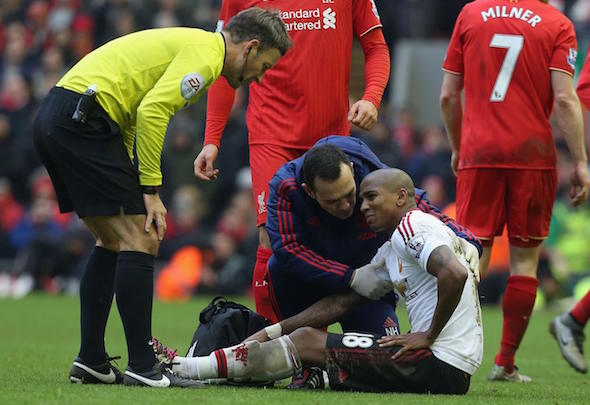 Manchester United fear Ashley Young might not play again this season after he suffered a groin injury that will require surgery, Football Insider sources understand.

Young was hurt in last weekend’s victory at Liverpool and joins other full-backs Antonio Valencia, Luke Shaw, Phil Jones and Marcos Rojo on the sidelines.

Manager Louis van Gaal admitted he is in the market for a new full-back this month after United’s latest crushing injury blow.

Young has been ruled out for “a long time” by the Dutchman and will go under the knife to cure the problem. A United source has told Football Insider that he is facing months out and there is a fear he will not play again this season.

Young has become the fourth senior United full-back to be sidelined with a serious injury, alongside Shaw, Rojo and Valencia. Jones, who can also fill in at right-back, is also currently out injured.

Speaking on Friday afternoon at his media conference, Van Gaal revealed he is keen to recruit a new full-back in the January window.

“When you see our luck with the full-backs this season, only [Matteo] Darmian is fit,” said the manager. “I need full-backs.

“We have started with Valencia, Shaw, Rojo, Darmian and Young, sometimes, and they are all injured – only Darmian is now back.

“We are looking for a level but clubs don’t want to sell. It is difficult. You think it is so easy.”

Teenager Cameron Borthwick-Jackson replaced Young at Anfield last Sunday and fellow rookie Guillermo Varela has also broken into the first-team set-up in recent months but Van Gaal is wary on asking too much of the youngsters.

“They have done great but the level of Manchester United is so high,” explained the manager. “To give every week a high performance normally is very difficult for youngsters to deliver that”.