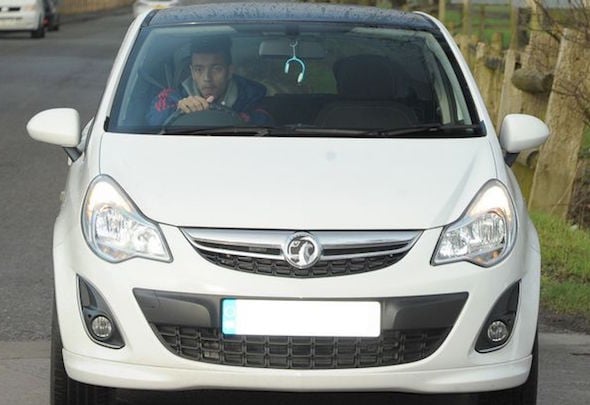 Manchester United’s latest academy graduate has caused heads to turn – by showing up for training in a modest £9,000 Vauxhall Corsa.

Fans of the Premier League strugglers will be glad to see that young starlet Cameron Borthwick-Jackson is steering clear of a more ostentatious vehicle.

Dutch winger Memphis Depay has been roundly criticised for turning up to United’s Carrington training complex in his matt black £250,000 Rolls Roye Phantom or his new Hummer.

The 18-year-old defender was photographed, looking a little awkward in the driving seat, driving into Carrington in a far less ostentatious white Corsa.

It must have looked a little out of place parked next to some of the other motors at the training ground, although he seems to have allowed himself one indulgence – a personalised registration.

The Corsa seems to be a favourite of United’s up-coming stars. When he was signed from Crewe in 2012, Nick Powell, then 18, turned up in the same marque, parking it among Bentleys, Range Rovers and Lamborghinis to meet his new team mates.

For now at least Manchester-born Borthwick-Jackson seems not to be getting too carried away with the attention.

Called upon in recent weeks because of a string of injuries, he has had a number of first-team run-outs and played the entire 90 minutes at left-back in Saturday’s 1-0 FA Cup win over Sheffield United.