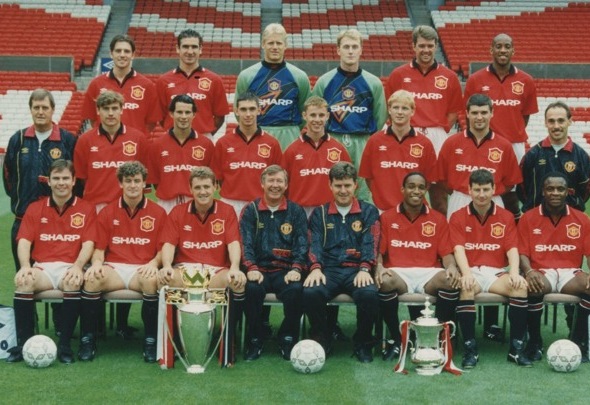 In the fourth part of a new series chronicling the greatest-ever players at Europe’s biggest clubs, Football Insider lists the top five in the Manchester United hall of fame. Taking into account factors such as individual brilliance, impact on the team, overall achievement and staying power, we rank the outstanding performers, in reverse order.

5. Roy Keane 1993-2005 (480 appearances)
His unseemly fall-out with Sir Alex Ferguson does not diminish his influence. Nor do his occasional sins and the brutal put-downs of those who have displeased him. Through desire, an unbending will and sheer force of personality, this central midfield colossus ranks as one of the all-time great Premier League players. Keane did not just shape football matches. He grabbed them by the scruff of the neck and squeezed them until his team emerged as winners. And if they did not he made damned sure they did next time.

4. Eric Cantona 1992-1997 (185 appearances)
Over-hyped? Over-feted? Just ask any United supporter who remembers the First Division days where this French artist stands in the club’s pantheon. Sure, there are many players who have produced a consistently higher standard of football for United. And over a longer period of time. But Cantona’s legacy, and the reason for his enduring popularity among supporters, is that he was the catalyst for transforming Sir Alex Ferguson’s team from underachievers to serial winners. United would have taken far longer to become the money-making machine they are today where it not for King Eric. Throw in the crucial goals, the charisma and the anti-establishment personality, and you have one of the crucial figures in United’s history.

3. Ryan Giggs 1991-2014 (963 appearances)
At virtually every other club, he would be top of the pile. But this one-club institution will have to settle for being the top dog from the formidable Class of ’92. Such was his precocity, he was catapulted into the first team long before his fellow graduates and such was his longevity he was controlling marquee matches after Scholes and company had shuffled off into retirement. At his thrilling, Road Runner-esque peak, Giggs could have walked into any team in the world. Yet he would become so much more than a flying winger who could skin full-backs alive with pace and skill. As flecks of grey appeared on that once jet-black head of hair, Giggs adapted his game, slotted into a new central midfield role and had the technical and tactical ability, not to mention supreme fitness, to start Champions League finals in his late 30s. None of his contemporaries, at United or elsewhere in Europe, could match that feat.

2. Bobby Charlton 1956-1973 (758 appearances)
No British player of the black-and-white era has a more impressive highlights reel. None of any era has possessed a more lethal shot. Or a greater ability at designing and winning matches. All while patrolling the midfield in lordly fashion. Charlton was the consummate footballer with strong claims to be the greatest England has ever produced. If he played today he would be worth £100million.

1. George Best 1963-1974 (470 appearances)
Forget the ‘what-ifs’, the drink addiction and a lifestyle that robbed him of his athleticism far too early. There was a spell, during the mid to late 1960s, when this outrageously gifted wide forward was Pele’s main rival for the title of the world’s finest player. History places Best outside of the top bracket occupied by Pele, Maradona, Messi and Cristiano Ronaldo, but he resides comfortably in the second tier alongside the likes of Zinedine Zidane, Johann Cruyff, Franz Beckenbauer and Eusebio. Best scored goals. He made goals. He won games single-handedly. But Belfast’s most famous son was so much more than a supreme sportsman. He was the first Rock ‘n Roll footballer, a showman who bewitched, seduced and made the common fan smile. That he also happened to have a great time while doing so makes him even more of a hero in some eyes. Just ask your Dad. Or your Grandad.